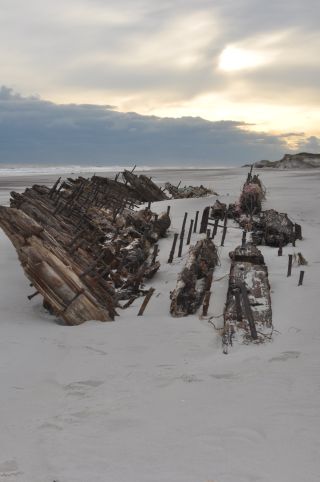 The weathered hull of the shipwreck lies about 4 miles (6 kilometers) east of Davis Park, between Skunk Hollow and Whalehouse Point, in the Fire Island National Seashore, as first reported by Newsday.

The remains are thought to be the Bessie White, more than 90 years old, said Paula Valentine, public affairs specialist for the park. Historical records don't agree on the year of ship's grounding, but here is an outline of its story:

The ship, a four-mast Canadian schooner, went aground in heavy fog about a mile west of Smith's Point, Long Island, in either 1919 or 1922. The men escaped in two boats. One capsized in the surf, injuring one crew member, but everyone (including the ship's cat) made it to shore safely. But the crew couldn't save the three-year-old ship or its tons of coal. The ship was salvaged in the following weeks.

The bus-size ship's skeleton has poked up through the sand before, such as after a nor'easter in 2006, exposing long boards and metal pegs, Valentine told OurAmazingPlanet.

The dune that used to bury the wreck eroded back an average of 72 feet, said U.S. Geological Survey coastal geologist Cheryl Hapke, who is studying the changes on Fire Island.

Archaeologists and park officials are documenting the shipwreck before the sea reburies it with sand, Valentine said.

"There's so little of it left we may not be not be able to determine which ship it actually is, but we may be able to learn more about its age," she said. "It's just a rare treat to see something exposed."

Fire Island is a barrier island, a natural system that takes the brunt of the damage during powerful hurricanes and winter storms. The entire island was submerged following Hurricane Sandy. In all, 80 percent of homes were flooded and seawater breached the island in four places.