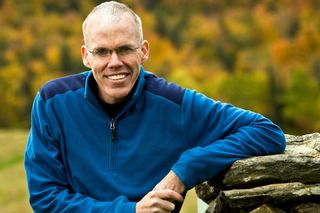 CHARLOTTE, N.C. — Addressing hundreds of geoscientists here on Sunday (Nov. 4) at the annual meeting of the Geological Society of America, writer and environmental activist Bill McKibben admonished them to take action on global warming with this unusual advice:

"If you find any more oil, don't tell anybody where it is," he said, half-jokingly, to laughter.

"Geologists have done way too good a job finding coal and oil," McKibben continued. "You could stop with this part of the program," he said, to laughter. "We already have way more than we can safely burn."

Gutsy things to say to the GSA members, considering McKibben had just been given the President's Medal — the society's foremost honor — by John Geissman, the society's outgoing president. The award honors the activist's good deeds and promotion of science "in the service of humankind," Geissman said.

McKibben began by poking fun at the scientists, calling them "studious and solemn." But he soon became more serious, tackling his life's avocation: getting people to reduce carbon emissions and halt global warming. [8 Ways Global Warming Is Already Changing the World]

McKibben railed against fossil fuel companies like Exxon Mobil, calling these corporations "outlaws" for their continued pursuit of petroleum and coal, the combustion of which is destroying the planet, he said. The reason nothing has been done about climate change, he said, is that these corporations spend so much money lobbying governments to prevent change, and dole out even more cash to constantly search for new fuel reserves.

As most of the audience was aware, Exxon Mobil is the meeting's largest sponsor, along with car maker Subaru. That didn't stop McKibben, who also called out Chevron (another meeting sponsor) for recently making the "the single biggest corporate political donation since the Citizens United decision."

To say McKibben's message was well received, however, would be an understatement. At the end of his talk, the vast majority of the room gave McKibben a standing ovation.

Before he ended, though, he spoke at length about the efforts of his organization, 350.org, which he described as a worldwide grassroots organization committed to replacing fossil fuels with renewable sources of energy that don't emit carbon dioxide, which traps heat in the atmosphere.

His group cannot possibly compete with oil companies for cash, so it is bringing to bear people's "passion, spirit and creativity" to move away from fossil fuels, he said.

McKibben detailed some of the disastrous consequences tied to high carbon concentrations that have already occurred, including sea level rise, ocean acidification and a melting Arctic. Temperatures in the Arctic have increased dramatically in recent years, studies show. This summer, a record-breaking Arctic sea ice melt stretched across a larger area than any previously measured. Greenland also set records in August with massive melting of its glaciers.

He also said that there is 5 percent more water vapor in the atmosphere than a few decades ago, which helps fuel stronger storms like Hurricane Sandy. The hurricane should be a wakeup call, he added. "Having water lap onto Wall Street concentrates the imagination," he said.

He urged the scientists to join the fight against global warming, not only as researchers, but, more important, as human beings.

He praised human ingenuity but lamented our species' lack of morality when it comes to this issue.

"Is that big brain attached to a big enough heart to change?" he asked.