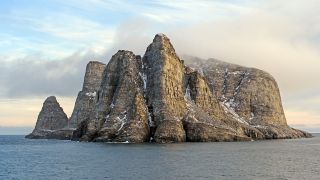 A piece of a lost continent has been discovered lurking beneath Canada — and the evidence was hiding in rocks that originated in Earth's interior, where diamonds form.

The secret was concealed in a type of diamond-bearing volcanic rock, known as kimberlite. Kimberlite originates deep underground in magma in Earth's mantle, and picks up hitchhiking diamonds as it hurtles toward the surface during volcanic eruptions.  The kimberlite, from Baffin Island in northern Canada, was collected by a diamond mining and manufacturing company.

Scientists found that the mineral chemistry of the Baffin Island kimberlite matched that from an ancient and long-lost continent that formed nearly 3 billion years ago and broke up 150 million years ago. A portion of that "lost" continent still anchors part of North America, and based on the location of the kimberlite samples, the size of that ancient slab is about 10% bigger than previously thought, researchers reported in a new study.

"Finding these 'lost' pieces is like finding a missing piece of a puzzle," lead study author Maya Kopylova, a geologist with the University of British Columbia in Canada,  said in a statement.

Earth's land masses, or continents, didn't always look the way they do now. The first continents emerged when Earth was just a restless baby planet. These ancient and enormous rocky slabs, called cratons, then shattered to form smaller land masses.

"One fragment of the North Atlantic craton is now part of Scotland," Kopylova told Live Science in an email. Another fragment is part of Greenland, and one more is part of Labrador in eastern Canada.

"Now we have found one more fragment on Baffin Island," she said.

For hundreds of millions of years, plate tectonics pushed continents together to form giant supercontinents, only to pull them apart and push them together again. The last of the supercontinents, Pangaea, began to separate about 200 million years ago, and by around 60 million years ago, the continents had split into the seven that we know today: Africa, Antarctica, Asia, Australia, Europe, North America and South America.

Though the planet's first continents fragmented and were lost to time, remnants of the long-lost land masses survive to this day, as stable cores in our modern continents. The kimberlite samples from Baffin Island, which came from a depth of nearly 250 miles (400 kilometers), bore chemical similarities to mantle rock samples from underneath part of the North Atlantic craton in Greenland, according to the study.

Under most remnants of ancient continents, the upper mantle contains about 65% olivine — "the main mineral of the upper mantle" — and about 25% of another mineral called orthopyroxene, Kopylova said. By comparison, the mantle makeup under the North Atlantic craton is about 85% olivine and around 10% orthopyroxene. And the mineral ratio in the Baffin Island kimberlite was a close match to the North Atlantic craton, Kopylova said.

Now, scientists know "with certainty" that part of Baffin Island was at some point joined with the North Atlantic craton, "rather than with other ancient continents," according to Kopylova.

This is the deepest location where scientists have found a piece of the North Atlantic craton, greatly expanding their view of the first continents from Earth's distant past, the researchers reported.

"Previous reconstructions of the size and location of Earth’s plates have been based on relatively shallow rock samples in the crust, formed at depths of 1 to 10 kilometers [0.6 to 6 miles]," Kopylova said in the email. With these new findings, "our knowledge is literally and symbolically deeper," she added.

The findings were published online Jan. 7 in the Journal of Petrology.