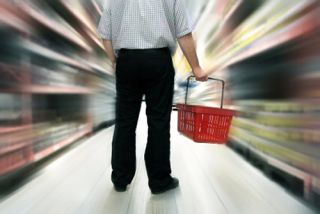 Too many choices you're not interested in making can drain your self-control to stick to goals, such as a diet or big project, a new study suggests.
(Image: © stock.xpert)

Woe to the caffeinated, for gone are the days of simply grabbing a coffee. Today's order requires surviving a gauntlet of choices: Latte or Americano? Flavored or plain? Cream and sugar? Small, medium or large? And the list goes on.

New research shows that such daily decisions eat up limited mental resources, ultimately rendering our self-control into mush. Which means making too many decisions might be why many people can't stick to a diet, finish a big project or even complete simple daily tasks.

"It's a strange paradox because human beings are drawn to choice," said study co-author Kathleen Vohs, a marketing professor at the University of Minnesota's Carlson School of Management. "We love having more choices, but at the same time the human psyche is easily overcome by them."

Vohs and her team, who conducted a battery of experiments during the past four years, detail their findings on how making decisions grates away self-control abilities in a recent issue of the Journal of Personality and Social Psychology.

Good self-control shares space with decision-making, Vohs said, in part of the brain's prefrontal region — a wrinkly section just behind your forehead.

"We're now looking at the relationship between overload of choice and self-control, and specific portions of the prefrontal region seem very much involved in both," Vohs said, referring to new brain scan research her team is performing. "We think taxing one of them weakens that area and it's not able to recover in time to engage in the other."

Whether good or bad, small or large, she explained that the very act of deciding seems to steal away brain power for sticking to goals.

"Even if you just have to decide between two cups of coffee at Starbucks, it's a small choice, true," she said, "but doing that over the course of a day will, by the end of the day, render you less able to be good at self-control."

To figure this out, the researchers conducted seven experiments. In one of the trials, subjects were asked to pick from a selection of consumer products, then afterward coerced to show will power by dunking their hands in ice-cold water or downing a bitter yet healthy beverage.

Turns out those who made more decisions before their unpleasant challenge kept their hands in the ice water for less time than or didn't finish as much drink as people who had fewer choices.

Another experiment used college students and had one group pick out courses to satisfy a degree while another group didn't have to make such choices. Researchers gave both groups math problems to study and, similar to the other experiments, the decision-makers performed worse and were more likely to succumb to distractions such as playing video games or reading magazines than those who weren't forced into choosing courses.

To add to their laboratory results, the researchers took their work to the decision-making hub of any community: A shopping mall. Shoppers who said they made more decisions during their day ended up scoring the worst on an impromptu math test than other shoppers.

Fun choices — such as deciding on a free gift from a registry — also turned up to be draining, although less than aversive choices.

Richard Ryan, a clinical psychologist at the University of Rochester in New York who wasn't involved in Vohs' work, said he finds the study compelling, but cautioned that it may not apply to all choices we make.

"This isn't a test of freedom of choice," Ryan said. "In this work, people were given tasks under some kind of coercing. When you're choosing from things you want to do, there's evidence to suggest it's actually energizing."

He explained that Vohs' group sees the mind as a muscle that fatigues.

"This may be partially true, but we add energy when we fulfill basic psychological needs," he said. "When I choose to see a loved one, for example, that's an energizing choose. Deciding on one of 20 different lotions in a store? That's a different story."

Vohs said deferring decisions you don't really care about to someone or something else is a good idea to reserve brain power to stick to your guns on things you do care about.

"If you're on a diet, follow a dietary plan to limit your choices. If you don't care what you do with your significant other this weekend, politely defer that decision to them," Vohs said. "Putting the burden on someone else seems might seem mean, but if a goal is really important to you, it's a fantastic idea."

As for wading through those countless coffee shop decisions?

"If you're just looking for a caffeine fix and don't care what form it comes," Vohs said, "just tell the barista to make their personal favorite."