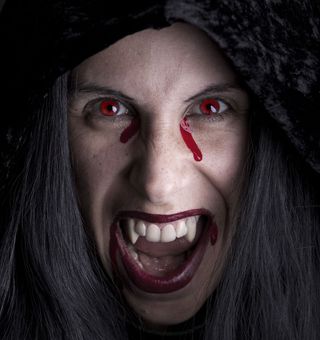 Ooooowwwoooo! Werewolves, zombies and good old-fashioned ghosts may pop out of the crypt tonight, but Halloween's creepiest staples didn't just appear out of thin air. Many of them once instilled real fear in medieval towns, when folklore reigned supreme and getting freaked out came easy.

Here are some real science and history tales of the scary stars of Oct. 31.

A standout among freaks and monsters, the nutritious pumpkin may be Halloween's most famous symbol. The practice of carving and lighting the gourd is a Celtic custom brought to America by Irish immigrants, who used the more-plentiful turnip back home. Glowing, frightening faces emanating from the pumpkins were meant to frighten off the evil spirits thought to roam the streets on Oct. 31, the Celtic New Year's Eve. [In Images: Peculiar Halloween Pumpkins]

They're blind, they hang out in caves and they inspire masked crusaders. But how did bats become associated with Halloween? The winged mammals can thank vampires for that. Like their Draculian counterparts, a small number of bat species actually subsist on animal blood — vampire bats have been known to attack humans on occasion — using sharp teeth to cut into the sleeping victim. Their nocturnal ways frightful appearances probably don't help either.

They're one way to add a little freaky je ne sais quoi to otherwise lovely architecture. But gargoyles, those frightening stone monsters protruding from cathedrals worldwide, do actually have a function. They were incorporated into gothic stonework as early as the 13th century to keep rain water off cathedral roofs, their mouths serving as the ejector spout. More spiritually, gargoyles were supposed to protect the congregation from the ever-present evil forces lurking outside. Killing two birds with one stone, so to speak.

Made famous in fairy tales, the small and furry goblin is more mischievous than menacing. Legend tells of goblins hiding out in forests, pulling pranks and sometimes switching human babies for their own changeling spawn. Unlike some of the other creatures mentioned here and probably because of their disconnect from religion, goblins never quite crossed the threshold from the imaginary to cause real panic in medieval towns. [10 Beasts and Dragons: How Reality Made Myth]

Forget the pointy black hat and warty nose. Those popular associations are relatively recent compared with the long and often tragic history of witches across the globe. In the past, witches were thought to possess magical powers connected with the natural world. Like all pagans, they were demonized as heretics by the Christian church, a hunt that reached its apex in medieval Europe and 17th-century America. Good luck picking them out of a crowd today: Witch costumes frequently top the list at Halloween.

Kings of the b-movie industry, zombies are individuals who've either had their souls sucked from their bodies or been revived from the dead through black magic. Zombie culture stems from the voodoo religion of Haiti, where it is still believed that people can fall into mindless trances just like the walking dead we've seen on film (minus the missing limbs and snacking on human flesh). An ethnobotanist investigating the claims in Haiti found a toxic drug that could actually induce a zombie-style catatonic state.

Poke two eyeholes into a bed sheet and you've got the easiest Halloween costume around. Becoming a real ghost is a bit more complicated. First you have to die, maybe tragically, then leave part of your soul hanging around Earth to spook relatives and haunt houses. From a supposedly scientific angle, parapsychologists argue that energy — including what's in the body — can never be completely destroyed. Society seems to agree: Various studies peg belief in ghosts at about 50 percent.

Typically normal and well-mannered until a full moon kicks in, werewolves are cursed shape-shifters that have appeared in the legend set of nearly every culture going back to ancient Greece. Like witches, they were hunted in medieval times and blamed for community murders that couldn't be explained otherwise. Though the violent werewolf stories of old seem to have fallen off the radar, except in Hollywood, there remains an excessive body-hair disorder lovingly nicknamed "the werewolf disease."

They vant to suck your blood, and have for quite some time. Vampires have popped up in cultural folklore for thousands of years, though the fanged-and-coiffed version we know comes from the 18th- and 19th-century myths of Eastern Europe. There, it was believed that someone who was born with deformities or died an irregular death could, after burial, rise again to terrorize the living. Vampires were considered "undead" and needed to feast on human blood to remain so.

More substantial, remains of a woman with a brick shoved in her mouth (possibly to exorcise the corpse), lying in a 16th-century grave of plague victims in Italy, may be the first vampire burial known to archaeology. More recent research, however, questions the interpretation, suggesting the brick accidentally fell into the skull.

One of those all-encompassing terms for an "evil spirit," a demon can represent anything from a malevolent ghost or fallen angel to a puppet of Satan. Like the notion of evil itself, they have ancient origins and appear in folklore and literature across the world. The demon that possessed Linda Blair in "The Exorcist" is probably pop culture's most famous and most talented, with levitation capability, rotating head and amazing, lifelike spewing action!