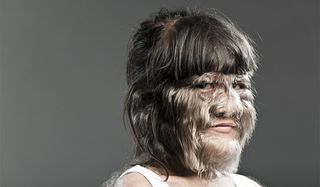 Scientists have discovered a genetic mutation responsible for a disorder that causes people to sprout thick hair on their faces and bodies.

Hypertrichosis, sometimes called "werewolf syndrome" is a very rare condition, with fewer than 100 cases documented worldwide. But researchers knew the disorder runs in families, and in 1995 they traced the approximate location of the mutation to a section of the X chromosome (one of the two sex chromosomes) in a Mexican family affected by hypertrichosis.

Men with the syndrome have hair covering their faces and eyelids, while women grow thick patches on their bodies. In March, a Thai girl with the condition got into the Guinness Book of World Records as the world's hairiest child.

A man in China with congenital hypertrichosis helped researchers break the case. Xue Zhang, a professor of medical genetics at the Peking Union Medical College, tested the man and his family and found an extra chunk of genes on the X chromosome. The researchers then returned to the Mexican family and also found an extra gene chunk (which was different from that of the Chinese man) in the same location of their X chromosomes. [Top 10 Worst Hereditary Conditions]

The extra DNA may switch on a hair-growth gene nearby, resulting in runaway furriness. The best bet for a culprit, wrote study researcher Pragna Patel of the University of Southern California, is a gene called SOX3, which is known to play a role in hair growth.

"If in fact the inserted sequences turn on a gene that can trigger hair growth, it may hold promise for treating baldness or hirsutism [excessive hair growth] in the future, especially if we could engineer ways to achieve this with drugs or other means," Patel said in a statement.

The study is detailed in the June 2 issue of the American Journal of Human Genetics.