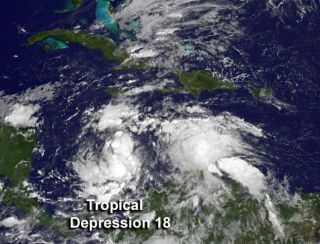 Tropical Storm Sandy, the 18th named storm of the 2012 Atlantic hurricane season, has formed in the Caribbean Sea to the south of Jamaica.

Formerly Tropical Depression 18, it was one of two tropical depressions to form in the Atlantic basin today (Oct. 22).

Sandy, which currently has maximum sustained winds of 40 mph (65 kph), is expected to hit Jamaica head-on Wednesday, according to the latest U.S. National Hurricane Center update. Its path after that is less certain and falls within a "cone of uncertainty" that forecasters create based on various model predictions. Sandy does look to impact Cuba and the Bahamas late in the week though.

The storm is expected to bring 5 to 10 inches (13 to 25 centimeters) of rain to Jamaica, Haiti, the Dominican Republic and eastern Cuba, the NHC said. Some isolated spots could see as much as 16 inches (40 cm) of rain.

Sandy isn't the only storm swirling in the Atlantic basin. Tropical Depression 19 formed late today and is expected to become Tropical Storm Tony shortly. The 2012 hurricane season has turned out to be busier than expected.

An updated forecast for the season made in August predicted that there would be between 12 and 17 named storms (those of tropical storm strength or higher), with five to eight of those storms becoming hurricanes. There have now been 18 named storms and nine hurricanes. The most recent hurricane was Hurricane Rafael.

Sandy formed during the so-called "second peak" of the hurricane season, a smaller spike that occurs in mid-October, after the main peak of the season, which occurs around August-September.

There has been some talk in various corners of the internet of Sandy impacting the East Coast next week, merging with a low pressure system coming across North America and creating a "perfect storm" that would bring significant snow to the area. While some models suggest this scenario, others show the storm curving out to sea, writes Jason Samenow at the Capital Weather Gang blog.

The bottom line is that it's too far out to forecast how Sandy might impact the East Coast.