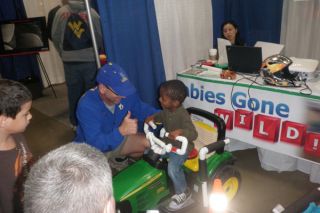 At the 2012 USA Science & Engineering Festival, children swarmed a National Science Foundation exhibit booth featuring electric-powered, child-sized toy cars. Assistants carefully explained how to operate the cars, which featured unique designs and operating features. One of cars, for example, would move only if the child driver remained standing. To stop, the driver had to sit down.

Excited children and their parents wondered about the cars' purpose; after all, these cars weren't being exhibited at a science and engineering event for being ordinary toys.

University of Delaware researchers had, in fact, specifically designed the cars to provide mobility to very young children with special needs.

Children born with severe mobility impairments, such as those associated with cerebral palsy, are at increased risk for mobility-related developmental delays in cognition, language and socialization. Providing daily mobility between the ages of 1 and 5 is critical, given that significant learning, brain and behavioral development is dependent on mobility during this time.

"Dr. Agrawal told me, 'We have small robots, and you have small infants, do you think we can do something together?'" Galloway explained.

Galloway was hesitant at first; he could not envision babies and robots in the same room much less interacting with each other. However, after visiting the lab and seeing Agrawal's robots in action, Galloway began to see the possibilities.

Galloway had experience with infants using their reaching movements to interact with joysticks, and Agrawal had experience in rehabilitation robotics. This led them to brainstorm ideas for a prototype to start infants driving mobile robots. They wanted to develop a model system, using experimental robotics , which could provide special-needs children with developmentally important mobility.

Soon after, the researchers created the first prototype, UD1. This robotic car featured a joystick and infrared sonar sensors with obstacle-avoidance software.

The researchers tested the prototype in the University's Early Learning Center, a research facility that accommodates 250 children with varying abilities.

In the initial group study, normal 6-month-olds sat in UD1, pulled the joystick, and away they would go. The children began to understand the cause-and-effect relationship between the joystick's movement and the car's movement. Once the children made this breakthrough, the researchers would train them in how to control the direction of their driving.

Galloway and his team began to quantify the results of the children's mobility. The children had increased cognitive and language scores, as well as better motor skills. Follow-up case reports on infants and toddlers with spina bifida and cerebral palsy noted improvements in driving skill and developmental scores.

With so much progress demonstrated, the researchers converted the UD1 prototype into a lightweight, convertible power-chair/walker. The device offered a definite fun factor. Some children could progress from being barely able to move their limbs to learning to move their legs with a power-assisted walker.

"As the children progressed and became curious of their environment, the device began to peel off," said Galloway explaining that the children became less and less dependent on the devices.

While Galloway and Agrawal's research demonstrated the technology's effectiveness, they faced a significant problem. Once parents learned of the developmental improvements, they were desperate to have the units for their children. But the researchers had only three devices. Galloway did not want to tell the parents, "Wait 10 years and then maybe we will have something for you."

"There are three high-end robots in the whole world — and they are here at UD — and obviously there are more than three kids that need them," said Galloway.

In fact, there are more than a half million children who suffer from congenital mobility issues.

Galloway soon realized that the important aspect of the device was to provide mobility. If they could create a low-tech platform, many more children could benefit.

Galloway and his team paid a visit to a toy store; there, they found cars that could serve their ends. They modified the cars electrically and mechanically, transferring the high-tech abilities into a low-tech "racecar."

The racecars are more like toys, without the sensors that help drivers avoid obstacles. However, this is not an issue because the racecars provide a more realistic experience for the child navigating the physical world. The racecars allow the children to behave more like typically developing toddlers. The feedback from families has been fairly positive.

The researchers are now working on spreading awareness about the racecars.

According to Galloway, there is not enough public awareness on this matter.

"Adults usually don't go through their workday thinking about kids with special needs, and if they do, they don't see the full picture until they see a video of the playground with one of my kids playing, compared to a child with no mobility," said Galloway.

Furthermore, while the power-wheelchair industry is cognizant of the need for devices for babies, there has been little progress made to help infants with mobility problems.

Galloway and his team are currently working on an inexpensive toolkit that families can use to modify toy racecars at home.

The researchers will also continue advancing the high-tech prototype. They plan the 2020 prototype, DARE2B, to include SMART Technology, a power-walker option, and a smaller and more efficient body.

They are also working on a dynamic harness that can hold a specific percentage of a child's body weight. The harness will be attached to a track in the ceiling. If the harness is successful, children will be able to experience safe walking and falling.

The USA Science & Engineering Festival was the first public event that Galloway attended to demonstrate the project. He did not expect the level of parental and child interest. Furthermore, he was happy that now more people know about the project.

"Having one more person understanding what is going on is what it takes to begin changes," said Galloway.

During the next USA Science & Engineering Festival, children might anxiously wait in line to try a new prototype that looks like a hybrid of bungee jumping equipment and a swing.