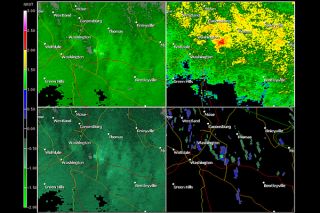 A tornado touched down in Eighty Four, Pa., on Thursday around 4 p.m. The tornado did minimal damage; however, there was no tornado warning out for the area. The National Weather Service in Pittsburgh gave a detailed explanation of why the storm that produced the tornado did not meet the criteria for a warning:

"A surface low pressure system was moving across the upper Ohio Valley towards the Pittsburgh area associated with showers. As the system moved over Allegheny County, however, it strengthened and spawned heavy rain with windy conditions. The system then moved east and weakened. The greatest instability for thunderstorms to develop was well to the south along the Mason-Dixon Line. Thunderstorms did indeed occur in parts of West Virginia and Maryland in the evening.

The Storm Prediction Center (SPC) issues Tornado Watches and Severe Thunderstorm Watches. There were no watches issued for our forecast area. In fact, the Pittsburgh area was not even in a Slight Risk area for severe thunderstorms. The nearest Slight Risk area issued by SPC was to our southeast over parts of WV, MD, and VA.

So you're probably wondering what happened with all these reports of flooding, wind damage, and possibly a tornado and what defines a severe thunderstorm. By definition the National Weather Service defines a severe thunderstorm as producing at least 1 inch in diameter of hail, winds of at least 58 mph, or 1 or more tornado (the result of a tornado would be a Tornado Warning). The "huge swirl" on the radar some of you may have seen was the actual surface low pressure spinning counter-clockwise associated with vorticity maximum within the shortwave crossing the region.

Again, the feature was best seen as it was crossing Allegheny County when the system was its strongest and the radar had the best view. Some of the winds had mixed down with the heavy showers causing sporadic areas of damage. Notice how I mentioned heavy showers and not thunderstorms. The reason for that is that there was no lightning and no thunder with the system spinning through the Pittsburgh area! There was however, one (the only one) strike of lightning in Moon Township near our office but that was it. Two areas of heavy rain moved across the Pittsburgh metro area causing some street flooding mainly due to poor drainage areas. Along with the heavy showers, the wind in some areas around the West End region caused several trees to fall, maybe due to the fact that the ground was very saturated from the recent rain in the last week.

At this time, several Special Weather Statements had already been issued to inform about high wind gusts up to 50mph and heavy rainfall that could potentially cause minor flooding and ponding on roads. A Flash Flood warning had been issued for the Pittsburgh Metro area to account for rapidly rising water on roads due to poor drainage. Certainly, severe weather is not very much expected to occur over western PA in late September, especially when the environment is not [capable] of even producing a thunderstorm with almost no instability. The velocity signatures seen on the radar were adequate enough for statements to be issued especially if funnel clouds were reported.

What's the difference between a funnel cloud and a tornado? A funnel cloud is when a rotating column of air does not make it to the ground and a tornado is a rotating column of air that extends from the cloud to the ground. It can't be certain from the video above that the funnel cloud actually made it to the ground due to certain obstructions. The storm survey will give a better indication of what happened and whether the damage done was caused by a tornado or a microburst (rapidly sinking air producing wind damage that is similar to, but distinguishable from, tornadoes)."

Below are radar images of the Washington County, Pa., tornado. The storm was a small supercell with rotation as shown on radar. A supercell is a type of storm that has rotating winds. Tornadoes usually come from supercell storms.

The two images to the left show the wind fields. Wind fields show weather the winds are moving toward or away from the radar. The reddish dots show strong winds.

The top right image is the radar data. The bottom right is an image showing where the strongest wind rotation is in the storm.