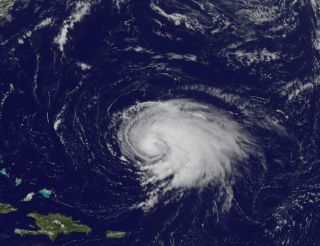 Tropical Storm Leslie intensified into a hurricane today (Sept. 5), beating out Michael to become the sixth hurricane of the 2012 Atlantic season.

Leslie first became a tropical storm on Aug. 30 far out over the Atlantic Ocean. The National Hurricane Center (NHC) issued a statement at 1:45 p.m. AST noting that the storm had passed the hurricane threshold (defined as winds of 74 mph or higher).

Projections of Leslie's path have it potentially hitting Bermuda around Sunday, but there is a larger area of uncertainty in a hurricane's path further out in the forecast — what forecasters call the "cone of uncertainty." It is currently 470 miles (760 kilometers) south-southeast of the island nation and moving to the north at about 2 mph (4 kph), the NHC reports.

Leslie is a larger tropical cyclone than Michael, meaning its howling winds extend further out from its center of circulation and that it affects a larger area.

Tropical Storm Michael is currently hovering below hurricane strength, with maximum sustained winds of 70 mph (110 kph). The latest NHC forecast says that Michael is strengthening quickly and calls for it to become a hurricane later today. The storm is about 1,125 miles (1,185 km) west-southwest of the Azores and isn't a threat to land.

Leslie and Michael are the twelfth and thirteenth named storms of the 2012 Atlantic hurricane season, respectively. Storms receive names once they achieve tropical storm status.

The National Oceanic and Atmospheric Administration updated forecast for the season calls for between 12 and 17 named storms, of which is expects five to eight to become hurricanes. Hurricane season typically peaks from late August through September.