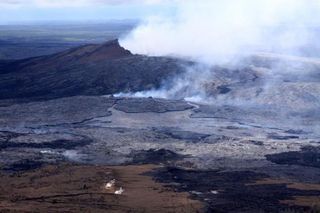 The secret movements of magma deep inside a volcano can be detected by tracking the subtle changes in gravity they cause. Surprising readings from a Hawaiian volcano have researchers hoping to better understand volcanic activity through gravity monitoring.

Continuous gravity measurements of active volcanoes are relatively rare, with most results coming from Mount Etna in Italy.

"One problem is the expense," researcher Michael Poland, a geophysicist at the U.S. Geological Survey's Hawaiian Volcano Observatory, explained. "Gravity measurements have always been a really expensive endeavor. The big users are oil and mining companies."

Now scientists have monitored the gravity at Kilauea, a popular tourist destination on Hawaii's Big Island, and discovered a regular cycle of fluctuations that suggest magma is churning a kilometer (0.6 miles) below the surface.

The way magma churns in underground chambers below volcanic vents is key to understanding how persistent volcanoes are, and whether or not they might catastrophically erupt in the future. However, what goes on deep under the Earth's surface is difficult to monitor.

One way to peer underground is by looking at Earth's gravity, the researchers said. Anything that has mass has a gravity field that pulls objects toward it. The strength of this field depends on the amount of mass. Since the Earth's mass is not spread out evenly, this means the strength of the planet's gravitational pull is stronger in some places and weaker in others. As such, the flow of magma from one place to another can be detected from above.

"Kilauea is the world's most active volcano," Poland said. "It's erupted almost continuously since 1983. It's a natural 'lab volcano' — a great place to try and study something like gravity measurements."

The researchers installed two continuous gravity meters at the summit of the volcano in 2010. One was about 1.2 miles (2 kilometers) northwest of the eruptive vent at the summit and recorded measurements every10 seconds, while the other was placed about 500 feet (150 meters) east and recorded data every second.

They detected gravity fluctuations that came in a cycle about 150 seconds long.

"There was no expectation for that kind of result," Poland told OurAmazingPlanet. "That gravity oscillation came out of nowhere. It points to the idea that there's probably a lot of things going on in volcanoes, glaciers, wherever you look, but we haven't developed the tools to detect these sorts of things."

Magma feeding the eruption at the volcano climbs from the Earth's mantle layer and passes through a complex system of reservoirs, where it may be stored before it flows to the eruption site.

The researchers' computer models suggest the fluctuations they saw were caused by magma churning in a reservoir about 0.6 miles (1 km) below the surface.

"Ultimately we want to predict eruptions better — predict the time, place and magnitude," Poland said. "Gravity measurements are one of many techniques that will help move us toward real predictions of eruptions, which comes from a better understanding of what's happening beneath our feet."

Poland and his colleague, Daniele Carbone, detailed their findings in the September issue of the journal Geology.