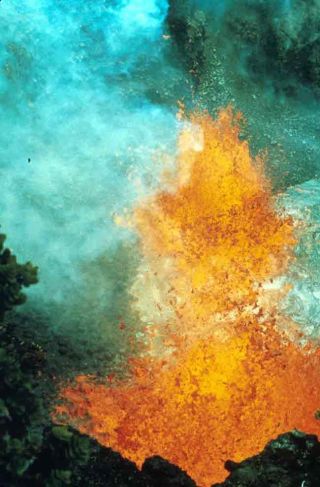 The huge, underground pocket of molten rock  that feeds Hawaii's volcanoes may be a lot closer to the Earth's surface than previously thought; it could be the shallowest in the world, new chemical analysis suggests.

The new findings may help researchers better predict when the islands' volcanoes are going to erupt.

“Hawaii was already unique among volcanic systems, because it has such an extensive plumbing system, and the magma that erupts has a unique and variable chemical composition," said Julie Ditkof, an honors undergraduate student in earth sciences at Ohio State University.

Using a technique developed by Michael Barton, a professor of earth sciences at Ohio State, Ditkof studied nearly 1,000 magma samples from Hawaii. She presented her findings on Tuesday, Dec. 14 at the American Geophysical Union Meeting in San Francisco.

For his own research on Iceland's volcanoes, Barton determined that the chemical composition of once-liquid magma can indicate the pressure at which it crystallized. That information can then be used to determine how far under the Earth's surface the magma originated.

When Ditkof applied the technique to Hawaii's volcanoes, she found the islands' fiery mountains share a single so-called magma chamber, which lies a mere 1.9 to 2.5 miles (3 to 4 kilometers) below Hawaii.

"Now we know the chamber is at a shallow depth not seen anywhere else in the world," Ditkof said.

In comparison, the magma chambers beneath Iceland lie at an average depth of 12.4 miles (20 km).

Researchers could use Barton's chemical analysis technique to regularly monitor pressures inside Hawaii's magma chamber and make more precise estimates of when eruptions are going to occur.

"Hawaii has huge geothermal resources that haven’t been tapped fully," he said, adding that scientists would have to determine whether tapping that energy was practical — or safe.

"You'd have to drill some test bore holes. That's dangerous on an active volcano, because then the lava could flow down and wipe out your drilling rig," Barton said.