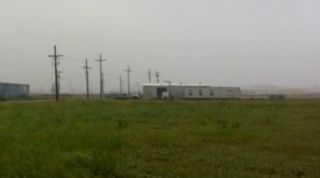 In the eye of the storm, literally. Researchers braved Hurricane Isaac's fury to capture data in the middle of the storm.
(Image: © Patrick Marsh. )

Standing in the eye of a hurricane sounds like a pretty crazy idea. But Patrick Marsh did just that — and he has the video to prove it.

The Ph.D. candidate in meteorology at the University of Oklahoma was inside the eye of Hurricane Isaac as the Category 1 hurricane roared inland along the Gulf Coast this week.

In the eerie video, a dull gray sky looms over a green landscape that is utterly still. The only sound that breaks the silence is the occasional chirp of a lone bird.

It was "pretty surreal," Marsh told OurAmazingPlanet in an email. "There were radio reports of people in the New Orleans area having to be rescued by cutting through their roofs, and here I am not far away listening to birds chip," he said.

Marsh wasn't there just out of idle curiosity — he was gathering radar data. Marsh was taking high-resolution measurements of the structure and evolution of Hurricane Isaac's eyewall — the swirling walls of clouds that rotate around the storm's center — as part of the University of Oklahoma's Shared Mobile Atmospheric Research and Teaching - Radar program.

There's a dearth of quality data on eyewalls, since it's a challenge to get radars inside the middle of a tropical cyclone — the umbrella term for tropical storms and hurricanes.

"Our understanding of what happens in the eyewall, and how the evolution of the eyewall impacts the resulting cyclone, is still rather limited," Marsh said.