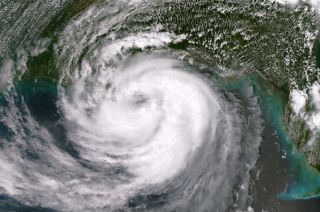 When Hurricane Isaac swept ashore as a Category 1 storm, its destructive power seemingly took some by surprise. As images of submerged houses and news of dramatic rooftop rescues made the rounds, the Web was abuzz with expressions of disbelief that a mere "Cat 1" storm could be the culprit for the catastrophe unfolding before people's eyes.

"Man that's just too much water to be a Category 1 or tropical storm," wrote @KeepNUpWithMike, reflecting the sentiments of many Twitter users.

Yet these labels — Category 1 hurricane, tropical storm— are based only on top sustained wind speeds. And although that's important, it's by no means the only factor that determines a storm's appetite for destruction, explained Tim Schott, a meteorologist at National Weather Service headquarters in Silver Spring, Md. "There are other factors that can be critical as well," he told OurAmazingPlanet.

However, none of these other factors are used to rank hurricanes on the Saffir-Simpson Scale. And some scientists argue that since the labels reflect only one facet of a storm's destructive power, it's time to change the way we categorize tropical storms and hurricanes.

Yet all forecasters emphasized that storms that are comparatively low on the hurricane scale can still cause horrific damage.

"A lot of the news media and people in general have noted this is only a Category 1 storm, but [Isaac's effects] show that Category 1 is just the description of the winds," Schott said. [Images: Hurricane Isaac Packs a Punch]

Along with wind speed, the sheer size of a storm, how quickly it is moving and the angle at which it's approaching land also influence its potential to wreak havoc. Isaac possessed some of the most menacing of these qualities.

First, Isaac is simply a big storm, said Chris Landsea, the science and operations officer at the National Hurricane Center in Miami. "Ever since it formed, it's been a large tropical cyclone," he told OurAmazingPlanet.

Bigger storms have a wider reach, affecting more people, and they're also tied to more severe storm surge, or "the ocean being pushed ashore," as Landsea described it.

"Isaac's storm surge is extended all the way to the Florida panhandle," Schott said, adding that parts of Louisiana have seen inundation as high as 11 feet (3 meters).

Isaac is also moving slowly. The storm crept along at about 6 mph (9 kph) for most of Tuesday and Wednesday, and is moving at 8 mph (13 kph) today (Aug. 30) — a snail's pace for a storm. That means it's hammering the same areas with heavy downpours for hours, even days, at a time.

Even relatively wimpy storms can cause terrible damage if they stay parked in place, Landsea and Schott said, since the unending rains can spark inland flooding. Isaac has reportedly dropped some 23 inches (58 centimeters) of rain near Gretna, La., according to unofficial numbers from the National Hurricane Center.

The direction of a storm's approach also plays a role in its destructive power — certain angles promote greater storm surge, said Robert Henson, a meteorologist who works as a science writer for the University Corporation for Atmospheric Research, in Boulder, Colo.

Isaac hit the Gulf Coast along a track moving from southeast to northwest. Since hurricanes and tropical storms spin counterclockwise (in the Northern Hemisphere, at least), Louisiana lay in the path of the winds as they swung northward and westward, allowing the storm to push even more ocean water toward land. In that situation, a tropical cyclone "will pile up more water," Henson said.

Yesterday afternoon, Isaac was downgraded to a tropical storm — its winds dropped to 70 mph (110 kph), falling 4 mph short of the dividing line between a Category 1 hurricane and a tropical storm.

"Whew #Isaac down to a Tropical Storm," wrote Sam Champion, the weather anchor for ABC's "Good Morning America," just after the National Hurricane Center (NHC) announced the storm was no longer a hurricane.

Yet the message from the NHC wasn't one to inspire relief: "Isaac weakens to a tropical storm. Life-threatening hazards from storm surge and inland flooding are still occurring," forecasters wrote. [Video: Isaac Makes Landfall]

The downgrade had done little to change immediate conditions on the ground.

Quite a few tropical storms and Category 1 hurricanes have proved incredibly destructive in the past, yet their power still seems to surprise. Just last year, Irene made landfall in New York as a strong tropical storm, and caused some $19 billion in damage, Henson said — much of it because of horrific flooding.

In the face of continued shock at the power of relatively low-ranked storms, some say that the labels themselves can promote a false sense of security.

"They know what category they're going to move for, and if they hear something is just a tropical storm or just a Category 1, they may think it's not worth considering evacuation or even putting shutters on," Powell said, emphasizing that these are his views as a scientist, and not necessarily those of NOAA.

Powell has partnered with an engineer to come up with a different way to quantify hurricanes. The system takes more factors than wind speed into consideration when labeling a storm. Called Integrated Kinetic Energy, the methodology tries to paint a more nuanced portrait of a storm's power by accounting for its overall wind energy, and looking at its sheer size, both of which affect its destructive potential.

"We've tried pretty hard to push for changing the way we're doing things right now so these large storms are given more consideration," Powell said. "Unfortunately, this is an area that is in desperate need of change, but has not changed yet."