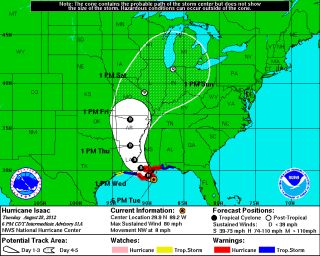 The predicted path of Hurricane Isaac, as forecast by the National Hurricane Center.
(Image: © NOAA.)

UPDATED AUG. 28, 8:50 PM ET: Tropical Storm Isaac became a hurricane today (Tuesday afternoon) and made landfall in the evening in southeastern Louisiana around the mouth of the Mississippi River, near New Orleans. The days-long path of Isaac brought it from the distant reaches of the Atlantic Ocean, through the Caribbean and into the Gulf of Mexico.

Click on the map at left to see the forecast path for Isaac released near the time of landfall. The final location of landfall was well inside the cone of probability that had been predicted since yesterday. Isaac will weaken to a tropical storm (“S” on the map) and then a tropical depression (“D”).

Editor’s Note: This will be the last update to this page. For more on the storm, including Hurricane Isaac images and reports of the how the storm played out, see our Hurricane Isaac News & Features page.

The exact path of a hurricane cannot be predicted, but this forecast went well. Meteorologists with the National Hurricane Center (NHC) use several models to project the track within a cone of possibility.  Each of a half-dozen NHC computer models projects a different likely path, and the cone encompasses the overall best guess.

Forecasters had predicted that storm surges could reach 6 to 12 feet along the storm’s path, with the right side of the storm (as viewed from above) seeing the highest surges. Additional predictions for Isaac’s path as it moves inland, along with watches, warnings and other information, are available at the NHC.

See also a video of Isaac’s path as it formed in the Atlantic, and another video of Isaac’s track in recent days as it churned through the Caribbean and into the Gulf — the whole journey is very similar to that of Hurricane Katrina, which hit New Orleans 7 years ago tomorrow (Wednesday). Also check out this short satellite-based video of Isaac’s storm clouds circling counterclockwise, as all hurricanes do.