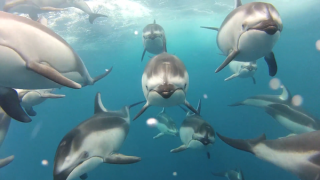 Trust doesn't come easily these days. A few too many amazing user-generated videos have later turned out to be hoaxes, often made with the purpose of going viral and advertising a product. While it may be difficult to question something as joyous as underwater footage of a swimming dolphin pod, experts say this latest viral video demands skepticism.

The video, which was posted to Vimeo on Aug. 7 titled "The Blue," begins with a group of fishermen in a boat trawling for tuna in the Pacific Ocean. One of the men, Mark Peters, drops a "GoPro torpedo" that he built into the water, a device that aims his underwater GoPro camera at the ocean behind their boat. Right on cue, a pod of what appear to be Pacific white-sided dolphins shows up. To the soundtrack of the film "Into the Wild," viewers watch in high-definition as the dolphins swim in the boat's wake.

In the six days since it was posted, the majestic footage has racked up more than 800,000 views and received widespread media coverage. But is it just an ad?

The GoPro team says they had nothing to do with it. "This video was 100 percent user-generated and is not part of any GoPro marketing," Adam Selwyn, a PR representative at GoPro, told Life's Little Mysteries. "We shared the video through our Facebook channel on August 9th and also saw a huge increase of views and likes. Obviously we are delighted to see the videos success as we are constantly impressed and amazed by our fans' and users' creativity and ability to capture amazing content." [Viral 'Human Bird Wings' Video Is Fake]

Peters, the fisherman allegedly behind the video, also swears by its authenticity. In an effort to lend credence to the idea, he says he has played around with his homemade GoPro torpedo before and has posted videos to fishing blogs in the past. No such videos turn up in Web searches, however.

Furthermore, GoPro's marketers consistently deny involvement with videos that viral marketing experts strongly believe they created. Case in point: an allegedly user-generated video posted last summer in which a seagull steals a man's GoPro camera and soars above the coast of France for several minutes, filming the glorious landscape below. The man allegedly found his camera where the seagull dropped it on the wall of a castle and posted the video online with the title "Seagull stole GoPro."

Experts pointed out just how unlikely it would be for a seagull to pick up a camera, aim it downward for a while, then drop it far away only to have it inexplicably found by its owner. The video's explicit mention of GoPro in the title (instead of "camera") also raised red flags. GoPro denied involvement, and the stolen camera's owner also swore the video was real. However, he was interviewed doing so at a Cannes film festival for advertisers, and he has been known to make video ads in the past that use CGI (computer generated imagery).

Brent Coker, an Internet marketing expert at the University of Melbourne in Australia, thinks the dolphin video appears to be an elaborate advertisement created by GoPro. Coker put out a theory last year highlighting what it takes for a viral-produced movie to actually go viral, and "The Blue" has all the elements of success, he says. "Most definitely, in my eyes, the GoPro movie is an exemplary example of how to produce a BVMP" — a branded viral movie production, Coker wrote in an email.

First, the video looks seeded with mentions of GoPro. "The title and captions really hype it up, like it had a goal to make it viral. I also love the cheap captions (done in Adobe Premiere), which add to the homemade feel and authenticity. A perfect disguise (if it were me making a BVMP)," he wrote.

Secondly, the video is edited in a "chopped up" way that creates anticipation and wonderment, he noted — a key element of many successful viral-produced movies. [10 Hoax Videos Debunked] It was smart for GoPro to deny their involvement, even if the video is computer-generated and an ad, he said: "If I were making a viral movie, then I wouldn't confess to it being professionally produced. As soon as people know its fake, it loses momentum. Of course, after the movie has reached critical mass, then it doesn't matter. If people learn it's actually an advanced advertisement in the early stages, then it can kill it."

If the dolphin video is an ad, it seems to have gotten a big enough head start on its critics for GoPro to reap the rewards. The latest comment on the video reads, "I've been really wanting a Go Pro — this just sealed it."