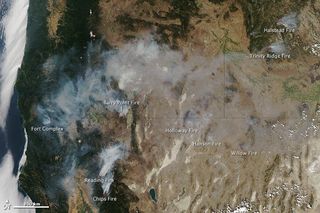 There are currently 59 large fires burning across 10 states, many of which can be seen in this image taken by NASA's Aqua satellite on Aug. 11.
(Image: © NASA Earth Observatory)

The fires haven't gone out.

NASA's Aqua satellite captured this image of wildfires throughout the western United States on Saturday (Aug. 11). Smoke can be seen billowing from the blazes and red outlines show where the fires burn the hottest.

Wildfires raged through Colorado and throughout the Southwest earlier this summer. Now the western states of California, Oregon, Nevada and Idaho are feeling the burn. Today (Aug. 13) 28 fires blazed across the four states, burning through vegetation ranging from sagebrush to grass to beetle-killed lodgepole pine forests.

There are currently 59 large fires burning across 10 states, according to the National Interagency Fire Center. As of today, fires have chewed through 9,188 square miles (23,796 square kilometers). That's above the 10-year average for this date, which is 7,639 square miles (19,785 square km).

It's been a bad year for wildfires, partially due to the intense drought gripping much of the country.

There are three large fires burning through conifer forests in northern California: the Reading fire in Lassen Volcanic National Park, the Chips fire in Plumas National Forest and the Fort Complex fire in Klamath National Forest. The largest of the three, the Chips fire, had consumed 55 square miles (143 square km) and was 12 percent contained as of today. All three fires were ignited by lightning.

Near the California border in Oregon, lightning also sparked the Barry Point fire, which had burned 36 square miles (93 square km).

In northern Nevada, the Holloway, Hansen and Willow fires burned through grass, brush and sagebrush. The Holloway fire was the largest and has burned 525 square miles (1,360 square km). Lightning also ignited all these fires eight days ago.

In Idaho, the Halstead fire is burning through stands of beetle-killed lodgepole pines in Salmon-Challis National Forest. It has already charred 77 square miles (200 square km) and is 3 percent contained. South of it, the Trinity Ridge fire had burned about 58 square miles (150 square km) and was 5 percent contained. Lightning ignited the Halstead fire on July 27, whereas human activity started the Trinity Ridge fire.