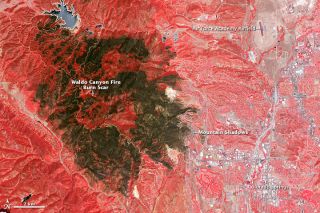 Colorado's devastating Waldo Canyon Fire has left a massive scar on the Earth that is visible from space.

A false-color image snapped by a satellite yesterday (July 4) shows the blackened scar covering the mountainous terrain west of Colorado Springs, where the fire continues to burn.

The Waldo Canyon fire was first reported on June 23. So far, it has burned 18,247 acres and destroyed 346 homes, making it the most destructive fire in Colorado's history.

In the satellite image of the fire, forest and vegetation that was spared appears bright red; brown marks the burned areas. The darker the brown, the more severe the burn.

It's unclear what sparked the destructive blaze, and its cause is under investigation.

Although the Waldo Canyon Fire has proved the most destructive, several far larger fires are also burning in the western United States, and atmospheric models indicate that winds have carried smoke from the multiple blazes out over the Atlantic Ocean and as far east as Greenland.

The largest active blazes are in southeastern Montana, where wildfires sparked by lightning strikes have burned 300,432 acres so far.

In all, more than 70 wildfires are burning around the United States, from Alaska to Florida to Utah.