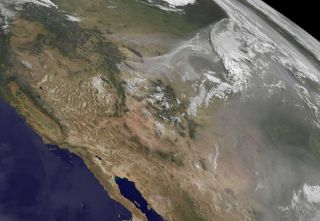 Dozens of wildfires are raging around the western United States, and the large-scale burns are sending smoke as far east as Greenland, according to some atmospheric models.

In all, about 60 wildfires are burning around the nation, from Alaska to Utah to Florida, and satellite images show hazy curtains of smoke hanging over huge portions of the eastern two-thirds of the country.

The hotter the fire, the higher its smoke can go — and the higher the smoke goes into the atmosphere, the farther it typically travels, Grell told OurAmazingPlanet.

"The winds are much stronger up there, so it gets transported much quicker," he said. In addition, once smoke gets to certain altitudes, it's less likely to be washed out of the air by rainstorms, Grell said.

Smoke from extremely hot wildfires can rise 4 to 5 miles (7 to 8 kilometers) into the atmosphere, and can even trigger massive thunderstorms, but it's likely that the smoke from the recent spate of fires is hanging out about 1 mile (1.5 km) above the ground.

An animation produced by the weather-forecasting branch of NOAA shows plumes of smoke drifting up over the Great Lakes states and reaching areas of the East Coast by June 29. [Watch the smoke animation]

Grell said that 10-day models from his own branch, which deals only in research, show the smoke reaching the Eastern Seaboard, out over the Atlantic, and drifting up toward the southern tip of Greenland. However, he said, although it is certain that wildfire smoke would certainly be in the mix, a certain proportion of the drifting haze would be pollution produced by the city centers along the East Coast.

"There is definitely still going to be some smoke effect in there — how much of it, I can't really say," he said.

Smoke does play a role in the weather — it can reflect sunlight, cooling some regions, and plays a role in cloud formation, Grell said.

Although the maps may look dire, those who live in the smoke's path aren't likely to feel any ill effects if they're far enough away from the wildfires, according to asthma expert Mitchell Grayson in Milwaukee, one of the areas beneath a smoky plume in the models.

"Even though it could be covering a large area, if [the smoke] is in the upper atmosphere, it's not going to be a problem, because it's not the air we're breathing," said Grayson, an associate professor of pediatrics at the Medical College of Wisconsin.

"When you can smell it, that's when you're going to have problems," he said.