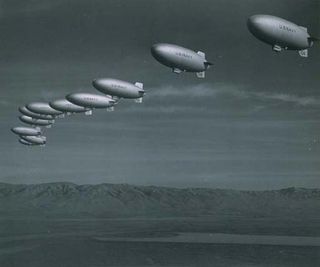 A throwback technology that predates the American Civil War could be updated for the new fight against terrorists. Unmanned blimps - 25 times larger than those that fly over sporting events - might one day patrol the airspace over U.S. ports.

These huge blimps would keep tabs on the seven million cargo containers that come into this country each year, of which only about 4 percent are currently inspected.

"The threat is a serious one, but container traffic is also one of the keystones of the global economy," said Donald H. Sebastian of the New Jersey Institute of Technology (NJIT).

About 90 percent of all world cargo moves by containers, according to the Department of Homeland Security. The U.S. alone imports about $750 billion worth of goods in containers each year.

The majority of these containers go from ship to truck or train without ever being opened. Sebastian said the plan, which is still in preliminary development, would be to employ 10 to 12 airships over coastal regions to remotely inspect cargo ships before they reach port.

Using solar energy to power its motor and electronics, a single airship could stay in the air for a year at a time.

"They are more like a satellite than a plane, but the advantage is they can come down," Sebastian said. And with an estimated price tag of $25 million apiece, "they are a heck of a lot cheaper than a half-billion-dollar satellite," he added.

Controlled from the ground, the airships would remain relatively stationary at an altitude of 70,000 feet, where, Sebastian said, "the air currents are sort of at a minimum." From this vantage point, they will be able to scan 500,000 square miles of the surface.

The airships would gather data with the help of an emerging stealth technology known as terahertz detection systems, placed inside cargo containers. Terahertz waves, which are higher energy than microwave but lower than infrared, can pass easily through plastics, clothing and other non-metals.

A "terahertz flashlight" would be illuminate the container. Besides seeing shapes, a detector would also identify certain terahertz emission signatures from explosive compounds and toxins.

"It's kind of like smelling it and seeing it at the same time," Sebastian said.

The detectors would not be able to sniff out nuclear material, nor would they be able to see inside metal boxes.

Sebastian expects that only one device - the size of a smoke detector - would be needed per container. And he added that they would be inexpensive.

"They'll have to be on the order of dollars if this is going to work," Sebastian said.