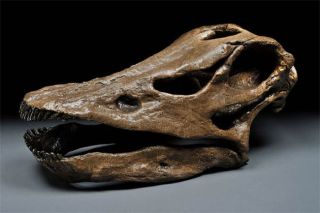 The leaf-guzzling eating habits of Diplodocus, the longest known dinosaur, have been revealed by scientists using a computer model of the beast's skull.

Diplodocus was a plant-eating sauropod from the Jurassic period, around 150 million years ago. At a hulking 12 tons (10,886 kg) in weight and more than 170 feet (51 m) in length, it was the longest animal to roam Earth. Diplodocus would have needed large quantities of food to sustain such a size, but until now, scientists were somewhat puzzled about how it ate.

An international team of researchers designed a 3D model of the dinosaur's skull based on a CT scan and digitally tested the mechanical stresses from three different eating habits: a normal bite, branch stripping and bark stripping. After the dinosaur was discovered more than 130 years ago, researchers initially speculated that Diplodocus stripped bark off of trees. But the computer model showed this method would have placed bone-damaging stress and strain on the dinosaur's teeth and skull, researcher Casey Holliday, of the University of Missouri, explained in a statement. Instead, the new data pointed to branch stripping.

"The model and the scans showed that branch stripping, which is when the dinosaur would place its mouth on a branch and pull all the leaves off the branch, placed little to or no stress on the teeth and skull," Holliday said.

The feeding habits of Diplodocus and its sauropod cousins are difficult to determine because the dinosaurs are "so weird and different from living animals that there is no animal we can compare them with," another researcher, Mark Young, with the University of Bristol, said in a statement. "That's why biomechanically modeling is so important to our understanding of long-extinct animals."

The study was published in the journal Naturwissenschaften.