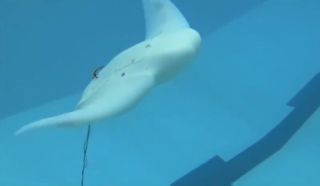 A swimming robot shaped like a ray fish could do military scouting or scientific surveys.
(Image: © University of Virginia)

Holy robot fish, Batman! A swimming "Mantabot" drone funded by the U.S. Navy could give even the Dark Knight his first experience of gadget envy.

Mantabot has a plastic body and silicone fins modeled directly on the cow-nosed ray — a cousin of manta rays and stingrays in the "batoid" ray fish family. Smaller or larger versions of the robot could swim effortlessly through the oceans as they run U.S. military reconnaissance missions or conduct scientific surveys of the underwater world.

"We are studying a creature to understand how it is able to swim so beautifully, and we are hoping to improve upon it," said Hilary Bart-Smith, a mechanical and aerospace engineer at the University of Virginia. "We are learning from nature, but we also are innovating; trying to move beyond emulation."

Bart-Smith's lab built the robot to mimic the nearly silent flaps of a ray's winglike fins as it swims or glides through the water. They first began by studying living rays in the ocean and in the lab, as well as dissecting dead specimens to understand how nature engineered their bodies.

Such rays can accelerate or hold position while using relatively little energy — an inspiration for making underwater drones that can stay out at sea for long periods without refueling or recharging.

Researchers built Mantabot's flexible silicone wings so that they are able to change shape during swimming sessions by expanding or retracting rods and cables. The robot's plastic body holds the main electronics and battery.

Mantabot could lead to bigger or smaller underwater drones capable of carrying equipment for military or commercial purposes. It could also help monitor water conditions and marine life, or even investigate oil spills or track ocean pollutants.

The wide array of possibilities shows up in Mantabot's diverse funding sources — the Office of Naval Research, the National Science Foundation and the David and Lucile Packard Foundation. The research team hails from the University of Virginia, Princeton University, the University of California-Los Angeles and West Chester University of Pennsylvania.

As a bonus, Mantabot's "bio-inspired" shape makes it fit in easily with other ocean creatures without unnatural disturbances. But the bio-mimicry may cut both ways if hammerhead or bull sharks mistake Mantabot for a real-life meal.

Still, the possibility of military robots becoming shark food has not stopped the Office of Naval Research from funding other naturally shaped underwater drones such as robot jellyfish.