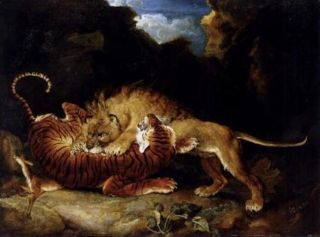 This ultimate cat fight has happened more times than you might expect. The Romans pitted African lions against Asian tigers in the Coliseum, to the rip-roaring pleasure of the Plebeians. A few fights were also staged in the early decades of the 20th century, and on several modern occasions, accidental cross-species encounters at zoos have quickly developed into gruesome scenes guaranteed to scar any nearby schoolchildren for life.

But how do these lion versus tiger showdowns go down?

Offhand mentions in the historical record imply that tigers usually came out on top in ancient Rome, and modern fights in captivity typically go that way, too — but not every time. Lions and tigers each have their strengths, and "the outcome of a given fight completely depends on the individuals: their history, fighting style and physiology," said Craig Saffoe, a biologist and the curator of great cats at the Smithsonian Zoo in Washington, D.C.

"But if I had to put my money on it I would give the advantage to the tiger," Saffoe told Life's Little Mysteries.

First, although an especially large tiger will outweigh any lion, the two species usually have comparable sizes. Estimates vary, but Saffoe says an average adult male African lion and an average adult male Bengal tiger (the most common wild tiger subspecies) both weigh in the neighborhood of 400 to 420 pounds (180 to 190 kilograms).

Lions' manes confer a physical advantage. According to Saffoe, this built-in chain mail protects their necks, and it also serves as a reminder of the fact that male lions are pre-programmed for fighting. "Lions are social where tigers are not, so just in growing up, lions are going to play-fight a lot because they are training to fight over the rights to be in a pride, whereas a tiger can go its whole life without an encounter," he said.

Although combat experience would give veteran lions prowess, the social nature of these cats may ultimately be their biggest weakness in a brawl with a tiger. According to the Lion Research Center at the University of Minnesota, coalitions of two to three male lions usually fight as a group against territorial rivals, but tigers always go it alone. This difference affects the two cats' instincts.

"What I've seen from tigers, they seem to be more aggressive; they go for the throat, go for the kill," Saffoe said. "Whereas the lions are more, 'I will just pound you and play with you.' Lions can maybe afford to play around a bit more because they've got backup with other lions. Tigers can't. Maybe they are conditioned through their evolution never to depend on help from anyone else and always to go for the quick kill."

It's that ruthlessness that gives tigers the edge more often than not.

Before we call it quits, might as well throw a few other cats into the ring. How would a South American jaguar fare against a lion or tiger? What about a leopard or cheetah? [The 6 Craziest Animal Experiments]

By Saffoe's reckoning, the big cats rank as follows: it's a toss-up between tigers, jaguars and lions at the top, and following them, in order of higher to lower rank, would be leopards, cougars, snow leopards and cheetahs. "The most intriguing match-up would be a good size Bengal tiger and a good-size male jaguar, because both those animals have about the same temperament, speed, size and strength," he said.

The leopard holds the wild card. "Don't count leopards out. They're small but very powerful and capable fighters," Saffoe said. "Who knows, a leopard might turn into a whirling dervish and rip up a lion or tiger."