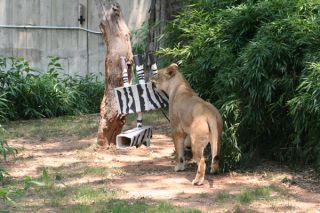 In the wild, lions and tigers are expert predators that seem to relish the experience of stalking and killing their prey. In zoos, though, animal-on-animal violence is typically forbidden, and there are no savannas or jungles in which to stage a proper hunt anyway. This presents a conundrum. Zookeepers must strive to satisfy their predators' natural urges and dietary needs within their limited confines.

Cold cut meats don't cut the mustard, but neither would a Coliseum-style takedown of antelopes that have nowhere to run. Most zoos strike a happy medium: They combine a carefully designed nutrition plan with simulated hunting experiences.

To keep the big cats' nutrition on par with what they would get in the wild, the Smithsonian National Zoo in Washington feeds its feline residents carcasses once a week. "Carcass feeding is an exciting and tasty way we enrich our carnivores ," Jennifer Zoon, public affairs assistant at the zoo, told Life's Little Mysteries.

The cats don't let a bit go to waste, Zoon explained. "Different parts of a carcass provide different nutrients: The muscle meats are rich in proteins and fats and are a great source of energy. Organs such as the liver provide carnivores with important vitamins, carbohydrates and fiber. Hides, furs and bones provide minerals, such as calcium, and aid in dental care."

Where the National Zoo's lions are concerned, rabbits and cows are the sacrificial lambs. "The zoo receives rabbit carcasses frozen; these are thawed and fed to the lions once a week. During the rest of the week the lions receive a commercially produced diet made of beef, which is supplemented with all the nutrition needed to keep them healthy, plus large femur bones, which they also enjoy chewing on, twice each week," Zoon wrote in an email.

There is some seasonal variation in zoo predators' diets. Last week, when most of the country was swaddled in a heat blanket, zoo animals felt hot like everybody else. According to Today.com, zookeepers at several zoos gave their tigers "bloodsicles" to suck on. Yes, bloodsicles are just what you think they are popsicles of frozen blood. [What Did T. Rex Eat? Grazers? Rotting Meat? Itself? ]

Though a well-rounded diet of bones, organs, meat and blood may satisfy lions' and tigers' nutritional requirements, their psychological health and killer instincts need extra work.

At some zoos, keepers "twitch" the carcasses being served in order to make them look animated.

Other zoos simulate hunts. "We have an enrichment program here that allows our animals to use their natural hunting behaviors without endangering live animals/prey," Zoon wrote. "For example, our lions and tigers are given boomer balls that they can stalk, chase, and pounce on as if they were prey. Our keepers are also very creative and can create 'prey' out of cardboard and other approved materials that our animals may then stalk/hunt."

Watching the animals, they do seem to enjoy these simulated hunting activities.

Do they vaguely sense that they're missing out on the real thing? Who knows? One thing is for sure, though: no matter how many cardboard dummies a lion plays with, it retains its killer instinct. In 2009, a wild deer accidentally hopped into the lion exhibit at the National Zoo. The startled lions quickly took an interest, and chased and swatted at the deer. It escaped, but was so seriously injured that zoo veterinarians had to put it down.

While some animal-rights advocates may be happy with how benign predator-feeding rituals are at the zoo, others may feel sorry for the predators, whose deepest urges are denied an outlet.

But zookeepers and zoologists point out that hunting is dangerous for predator as well as prey. An injury to a predator often an endangered species during the hunt is a risk its keepers are unwilling to take.

As Andrew Circo of the San Diego Zoo told the British newspaper the Guardian in 2008, "We do not feed live animals for a very important reason. Sometimes those animals fight back and, in exercising their instincts, may injure one of our endangered ... animals. And when dealing with many endangered species, you do not want to take a chance that an injury could lead to other health complications. Not even our snakes get live mice."