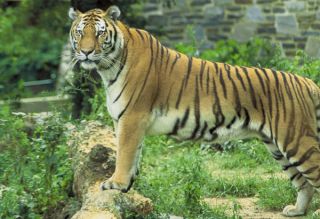 If you're on safari in Africa and spot a tiger, it's definitely something to write home about. Tigers as we know them, you see, have never lived in the wild in Africa. But there's still a chance you could see one there. Let us explain.

Lions, leopards and tigers are all part of the Felidae family of cats, which originated in Africa and share a common ancestor. At some point, probably around 2 million years ago, one offshoot of Felidae migrated east toward Asia, and those cats evolved into the orange-, black-, and white-striped beasts we know today. Once established in Asia, however, tigers never returned to Africa, although scientists aren't exactly sure why.

"One can offer a series of speculations about why tigers did not get to Africa, but they are all speculations," said J.L. David Smith, professor at the University of Minnesota's department of fisheries, wildlife and conservation biology. "The best explication is time."

Many wildlife researchers believe that, historically, tigers inhabited much of Asia, and that various tiger subspecies naturally migrated and spread out over time. Pleistocene glacial fluctuations and geographic boundaries, however, probably made it too difficult for tigers to return to Africa. According to University of Minnesota conservation biology researcher Shu-Jin Luo, tigers did not disperse westward to India until 16,000 years ago.

Now, although tigers are not indigenous to Africa, they can be found there in zoos, special reserves and even kept as pets. And that's how you might come across one in the wild.

In fact, this past July, a 310-pound (140 kg), 17-month-old pet Bengal tiger named Panjo escaped in South Africa. Panjo broke free from his owner's vehicle while being driven to the vet for a checkup, setting off a massive, panicked search party consisting of police and locals. He was found two days later, hiding by a farm, where his owner coaxed him safely out.

Tigers are endangered in India, Nepal, Indonesia, Russia, China and elsewhere largely because of habitat destruction, poaching and loss of prey. Only 3,000 remain in the wild, according to the Wildlife Conservation Society (WCS). Some 5,000 tigers are held captive in the United States, a prime location for refuge, to protect them from illegal poachers. In 2005, the Save China's Tigers foundation "imported" two rare South China tiger cubs (Cathay, female, and Hope, male) to a remote corner of South Africa in hopes of having them adapt to living in the wild, breed and pass on their hunting skills to their offspring.

Another pair of South China tigers named Madonna and Tiger Woods was sent to the South African preserve, which is 81,510 acres (127.36 square miles). There they roamed, regained their hunting skills and killed their own food, which included blesbok, a white-faced African antelope. After surviving independently in their South African training grounds and having several litters of cubs, the tigers were returned to the Chinese reserve in 2008.