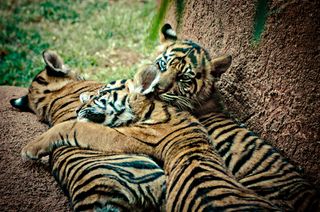 The cubs, one male and three female, are the first Sumatran tigers to be born at the zoo, and are the result of the zoo's tiger mating program, an arduous campaign that took more than three years to produce any cubs. With fewer than 300 Sumatran tigers remaining in the wild, the birth of the cubs brings hope that the rare species can be brought back from the brink of extinction.

"Every new litter is encouraging," Tara Harris, conservation director at the Minnesota Zoo and coordinator of the Tiger Species Survival Plan, told Life's Little Mysteries. "It's important to have this backup in zoos in case something were to happen with the wild tiger population."

But while the births are exciting for conservationists, tigers still face an uphill battle that isn't likely to get easier any time soon. [10 Species Our Population Explosion Will Likely Kill Off]

Of the nine subspecies of tigers, three have gone extinct in the past 70 years. The remaining six subspecies — Amur, Bengal, Indochinese, Malayan, South China and Sumatran — are all listed as endangered or critically endangered by the International Union for Conservation of Nature, an organization that rates the population health of species. Estimates place the total current tiger population (all subspecies combined) at around 3,200 individuals, a far cry from the more than 100,000 that existed at the start of the  20th century. [Why Don't Tigers Live in Africa?]

"There really are two challenges to the tiger's survival and it's tough to say which is bigger," said David Smith, a conservation biologist at the University of Minnesota, who specializes in tigers. The main threats to tigers are poaching and habitat loss.

In some Asian countries, tiger bones, eyes, teeth and other parts are prized for traditional medicines to treat a range of health issues, such as malaria and meningitis. In other countries such as Tibet, there is a large market for tiger skins. But it's difficult to stop professional poachers, and even a single, clever poaching group can have a large effect on the tiger population, Smith said.

On the other hand, the tiger's habitat, which is slightly different depending on the subspecies, continues to shrink as the human population and our need for land grows. The installation of hydroelectric dams, construction of new roads, cultivation of land for agriculture and other human activities are pushing tigers into smaller and smaller areas. And even in areas that are still large enough for tiger groups, there may to be too little prey to sustain the tiger numbers, said Smith.

"It's all very concerning with the small numbers that tigers have," said Harris. "Even without poaching and habitat loss, when you get down to those small numbers, a single catastrophic event (like a disease outbreak) can wipe out an entire population."

There have been numerous efforts to save the tiger over the years, with varying successes. A few organizations, such as the World Wildlife Fund and Wildlife Conservation Society, have recently launched concerted efforts to get top-level Asian government officials involved in tiger conservation. [The 6 Craziest Animal Experiments]

This is an important step because local governments can make decisions about the countries' land and resource use, unlike conservation organizations that have little or no political power. "I really think the future of tiger conservation is when governments step forward and take the responsibility," said Smith.

But the conservation efforts cannot rest solely on the shoulders of the government — villagers, who are more likely to come in contact with tigers and their habitat, need to take responsibility, too. Luckily for the tigers, this is slowly starting to happen. In Nepal, there is a youth core of about 180 individuals that patrol the forests, according to Smith. The village rangers are paid as forest or tiger watchers, who protect the area from illegal activities like poaching.

Additionally, there are the captive tiger breeding programs across the world — like the one at Oklahoma City Zoo — to help ensure that the remaining tiger subspecies don't die out.

"We used to say, 'Let's not get involved with the zoo approach, let's save them in the wild,'" said Smith. "Well, we didn't do so good with the wild. Now I want all the help I can get."