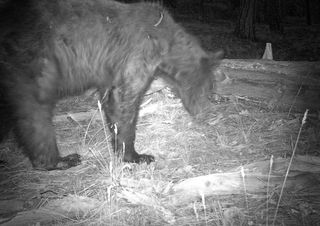 A hidden camera caught a rare picture of a large black bear roaming near the South Rim of the Grand Canyon last month.  The picture was recently released by park officials.

It's highly uncommon to see bears around this area because there are only a few natural water sources and it offers only marginal habitat, said Greg Holm, wildlife program manager at Grand Canyon National Park.

Holm told OurAmazingPlanet he thinks the bear may have been driven by thirst. "It's very, very dry this year," he said. "The theory is that that bear or some bears may have been traveling into the park to find new sources of water."

Wildlife biologists use several wildlife camera traps, like the one that snapped a photo of the bear on June 14 near Hermit Road, to gain information about animal populations in the park. Cameras are particularly helpful in studying elusive carnivores, which are typically nocturnal. The devices operate via heat and motion sensors to trigger them to automatically take pictures when there is movement within the camera's range.

This is a "reason for people to be more cautious about bears in the area," Holm said. Use common sense, like not feeding bears or approaching them, he said. While bears generally avoid people, it's always good to remember that uncovered trash, recycle bins, pet food and even bird feeders can act as bear attractants.