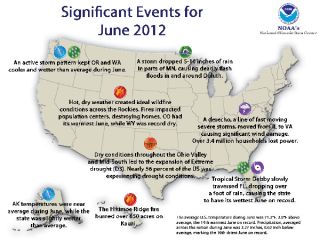 June weather records are in, and the nation's unprecedented warm spell continues, making this the warmest first half of the year and the warmest 12-month period since record-keeping began for the continental U.S. in 1895.

Last month, like many before it, had heat that was above average, and high temperatures during the second half of June broke or tied records in 173 locations, while no record cools were reported, according to the National Climatic Data Center (NCDC).

Overall, the nation is experiencing its 10th-driest June on record, but the reality of precipitation varied from region to region, the NCDC reported, noting that the Intermountain West saw record or near-record dryness, while Florida received record precipitation thanks to Tropical Storm Debby.

Driven by unusual warmth in the eastern two-thirds of the lower 48 states, the United States has seen a series of records or near-records this year. Global average temperatures, also tracked by NCDC, are also up.

Of course, these records are based on averages, so certain areas, such as the Pacific Northwest, have seen lower-than-average temperatures.

July started off with a bang, breaking or tying high-temperature records in 145 locations in the continental United States, according to NCDC data as of today (July 9). The intense heat that kicked off the summer of 2012 is the result of a "blocking" pattern that has caused the jet stream, a band of high-altitude westerly winds, to trap heat above the Midwest and Southeast, Jeff Weber, a scientist with the University Corporation for Atmospheric Research in Boulder, Colo., told OurAmazingPlanet earlier this month.

Likewise, the configuration of the jet stream kept warm air bottled up in the high latitudes during the winter, resulting in an unusually mild winter for many of the lower 48 states.

Because fluctuations in weather are natural, climate scientists are loath to attribute a single, extreme event, or even weather patterns over the course of a year, to human-caused climate change. However, the unusual warmth so far this year has not come out of the blue. Weather records clearly show that the world is warming up. The first decade of the 21st century was the warmest on record, according to the U.S. National Oceanic and Atmospheric Administration's State of Climate in 2010 report.