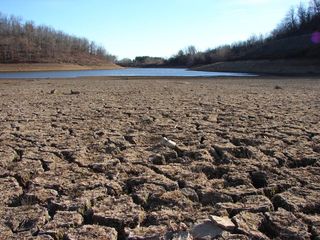 The Southwest may be stuck with more scenes like this dry lake bed.
(Image: © NOAA.)

The United States has endured 134 weather and climate disasters with overall costs reaching or exceeding $1 billion since 1980, with the total bill exceeding $880 billion.

And while the country was hit with 16 $1 billion-plus drought events in that time period, the associated price tags were responsible for nearly a quarter of the hefty total bill.

Currently, about 56 percent of the lower 48 U.S. states is in drought, ranging from moderate to exceptional drought, the most in the 12-year history of the U.S. Drought Monitor report, compiled by the National Drought Mitigation Center, part of the University of Nebraska-Lincoln.

This year's only $1 billion weather event, so far, happened on March 2-3 when an estimated 65 tornadoes wreaked havoc across southern and eastern U.S. states, costing $1.5 billion and causing 40 deaths.

While no single event can be said to be the result of global warming, scientists say more extreme weather should be expected as the planet warms, according to a report compiled by the Intergovernmental Panel on Climate Change (IPCC) in 2011. There were 12 $1-billion disasters that year.

In particular, the report authors predicted that with climate change there would be an increase in certain types of extreme weather, including daily high temperatures, heat waves, heavy precipitation and droughts, in some places.

"The report that was released by the IPCC on extreme events suggests that what we are seeing this year is not just an anomalous year, but a harbinger of things to come for at least a subset of the extreme events we are tallying," said Jane Lubchenco, NOAA's administrator, during a press conference at the annual American Geophysical Union meeting in December 2011.