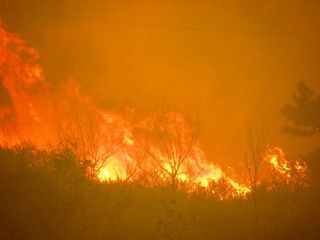 The Waldo Canyon Fire has been declared the worst in Colorado state history. With its flames still raging out of control, it has destroyed 346 homes in Colorado Springs, killed at least one person and burned an estimated 18,500 acres of land thus far. Meanwhile, the High Park Fire is charring pine forests in nearby Fort Collins.

But how do the Colorado wildfires compare to history's biggest blazes?

During the 19th and early 20th centuries, huge uncontrolled wildfires periodically arose that destroyed millions of U.S. acres, according to the National Park Service (NPS). In 1825, the Great Miramichi Fire burned 3 million acres in Maine and New Brunswick and killed at least 160 people. Two decades later, Oregon's Great Fire of 1845 blazed for weeks and downed 1.5 million acres of old-growth timber.

But the fieriest day in U.S. history was Oct. 8, 1871. Flames engulfed the Midwest: The Peshtigo wildfire burned 3.78 million acres of Wisconsin and Michigan forest and killed an estimated 1,500 people, according to the National Interagency Fire Center (NIFC). Meanwhile, a second Michigan forest fire raged, burning 1.2 million acres along with untold numbers of lumberjacks, and across Lake Michigan, the Great Chicago Fire burned the Windy City to the ground; 250 people perished and a record 17,400 structures were destroyed.

The Midwest had faced a hot, dry summer that year, and the multiple blazes were probably triggered by a front that moved in over Lake Michigan and spread the flames of small land-clearing fires. Alternatively, it has been speculated that fragments from a comet impact sparked the simultaneous wildfires.

Despite modern firefighting efforts, there have also been several enormous wildfires in recent history that dwarf the destructiveness of the High Park and Waldo Canyon Fires.

In 2002, the Rodeo-Chediski Fire, which began near Cibique, Ariz., burned more than 462,000 acres, caused the evacuation of more than 8,000 people, destroyed 426 residences and cost approximately $153 million, according to NPS records — making it the largest fire in Arizona history. That year, more than 88,000 U.S. fires cumulatively burned roughly 7 million acres.