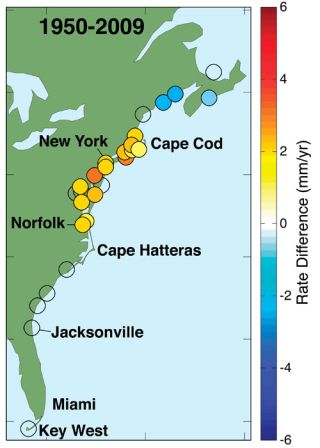 Increasingly red circles indicated locations where increases in sea level have been largest from 1950 to 2009. Researchers found a 'hotspot' of increased rates of sea-level rise from north of Boston, Mass., south to Cape Hatteras, N.C.
(Image: © Sallenger et. al.)

As the world warms and seas rise, some spots are expected to take the brunt of the higher ocean levels, while others may not see such a deluge, new research by the U.S. Geological Survey (USGS) reveals.

The study homed in on one "hotspot," where sea levels are rising more than three times faster than the global average: the 621-mile (1,000-kilometer) stretch along the eastern United States' Atlantic coast.

Records for a more recent, 40-year period, beginning in 1970, revealed faster rates of sea-level rise both globally and for this stretch of the U.S. East Coast. And rates are expected to continue increasing as global warming, which climate scientists agree is the result of greenhouse gas emissions, continues.

Researchers expected this to have a direct impact on people living in this area.

"Cities in the hotspot, like Norfolk, New York and Boston already experience damaging floods during relatively low-intensity storms," lead researcher Asbury Sallenger with the USGS said in a statement. "Ongoing accelerated sea-level rise in the hotspot will make coastal cities and surrounding areas increasingly vulnerable to flooding by adding to the height that storm surge and breaking waves reach on the coast."

But the effects don't play out evenly everywhere for a number of reasons. For instance, melting ice can cause land to rebound as weight is lifted, causing relative sea level to fall. Melting ice redistributes mass on the planet, and as a result, changes the distribution of the oceans. Likewise, changes in currents and winds alter the distribution of ocean-expanding heat.

The research team links rapid sea-level rise within this hotspot to a slowdown in the Atlantic Meridional Overturning Current, which transports warm water from the tropics into the higher latitudes. Fluctuations in this current have profound implications for climate, according to the U.S. National Oceanic and Atmospheric Administration.

The results of the research were detailed in Sunday's (June 24) issue of the journal Climate Change.