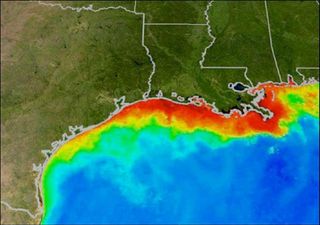 Low levels of oxygen dissolved in the water is often referred to as a “dead zone” (in red above) because most marine life either dies or leaves. Habitats that would normally be teeming with life become, essentially, biological deserts.
(Image: © NOAA)

The predicted size of this year's dead zone in the Gulf of Mexico depends on whom you ask. One forecast model predicts an unusually small area of oxygen-depleted water, while another predicts an extent in line with the recent average.

The reason for the difference: The more conservative prediction, made by researchers at the University of Michigan, only takes into account the nutrient-rich agricultural run off from the Mississippi River watershed this spring. While the other prediction, which comes from a Louisiana group, takes leftovers from the prior year's nutrient pollution into account.

These predictions are important because the loss of oxygen is bad news for the animals that live in these waters, and the dead zone threatens commercial and recreational fishing in the gulf.

This spring has been a drier-than-average one for the continental U.S., and the Mississippi River Valley and some other interior states experienced a May that was one of the 10 driest on record, according to U.S. weather records. [Mightiest Floods of the Mississippi River]

Less precipitation means less run-off to carry nutrients down the Mississippi and into the Gulf. Nutrients, specifically nitrogen, are responsible for the dead zone.

The Louisianan model factors in excess nitrogen brought into the Gulf the prior year and tucked into bottom sediments, for a "carryover effect."

The nitrogen pollution fertilizes algae in the water, which bloom, then die and sink. The microbes that decompose the dead algae suck oxygen out of the water. What's more, the lighter freshwater flowing into the Gulf forms a layer above the heavier salt water, this prevents oxygen from mixing into the deeper water.