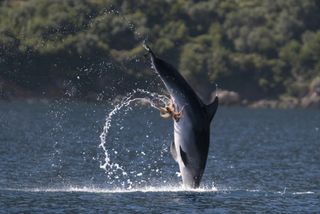 In this June 13, 2012 photograph, an octopus clings to the belly of a bottlenose dolphin.
(Image: © Joan Gonzalvo/Tethys Research Institute, via The Ionian Dolphin Project)

An octopus got the joyride of its life last week when it somehow became stuck on the belly of a bottlenose dolphin in the Ionian Sea. More specifically, the tentacled sea creature had a seat on the dolphin's genital slit.

Researchers with the Ionian Dolphin Project, part of the Tethys Research Institute, were observing a foursome of dolphins near the island of Kalamos off the west coast of Greece. Suddenly, one of the dolphins leapt out of the water with something strange dangling from its stomach. It wasn't until the researchers examined their photos of the leap that they realized the unidentified object was an octopus.

The dolphin may have been leaping from the water to detach its uninvited guest, Gonzalvo, the project manager of the Ionian Dolphin Project, wrote on the organization's blog. After shaking the octopus loose, the dolphin continued to swim with no signs of discomfort, he added.

Whatever the cause of the strange conjunction, octopuses are wily creatures. Many species can change not only their color, but their texture, to mimic specific objects and hide from predators. The Atlantic longarm octopus can even take this camouflage mobile: This species gathers its legs up and swims like a flounder, looking more like a fish than an eight-armed mollusk.

Dolphins are no slouches in the intelligence department, either. They live in complex social groups, and their unique whistles may tell other pods of dolphins exactly who they are. One group of Brazilian dolphins even joins forces with fishermen to drive mullet toward waiting nets. As a reward, the dolphins get to share in the fishy spoils.