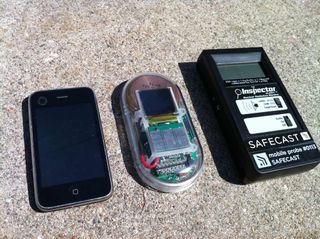 Japan's nuclear meltdown in the aftermath of the March 11, 2011 earthquake inspired the creation of a grassroots radiation sensor network and a homemade Geiger counter for ordinary citizens. The DIY Geiger counter has since gone on presale for a limited time before the more expensive official version hits store shelves.

Anyone can buy the half-price $400 version of the new Geiger counter through the Kickstarter project organized by the global "Safecast" project — the grassroots organization founded in the wake of Japan's disaster in March 2011. The smartphone-size device is being advertised as a "Swiss army knife of Geiger counters," because it can measure beta and alpha particles as well as gamma radiation.

Most Geiger counters can only measure far-traveling gamma radiation, but the detection of beta and alpha particles allows people to pinpoint local contaminated surfaces. The aim of the new counter, designed by a netizen known as Bunnie Huang, is to be useful for ordinary citizens rather than just government scientists or labs.

"I decided my tiny contribution to the effort would be to design a radiation monitor suitable for everyday civilian use," Huang wrote.

The Geiger counter designer described feeling "twisting knots" as he watched the tsunami "wiping out huge swathes of Japanese countryside," in the early hours of the earthquake and tsunami disaster on March 11, 2011.

"In a matter of hours, entire cities were washed off the map, leaving an eerie post-apocalyptic landscape of a few survivors weeping amongst twisted wreckage," Huang wrote. "Then, in the ensuing days, Fukushima Daiichi melted down, leaving in its wake one of the worst ongoing radiation contamination crisis since Chernobyl." [First Next-Gen US Reactor Designed to Avoid Fukushima Repeat]

The Fukushima Daiichi nuclear plant suffered a partial meltdown in the days after tsunami waves knocked out power for the reactors' cooling systems. Japan's government has kept a "no-go" zone that extends 12 miles (19 kilometers) around the nuclear facility because of the radiation threat.

Huang and Safecast made the new Geiger counter open-source so that anyone can download the design. But they scored a big win when International Medcom, a Geiger counter manufacturer, agreed to immediately start producing the new design and turn it into a reality.

The Kickstarter-exclusive edition of the Geiger counter offers a transparent case that reveals its working innards, as well as the $400 price tag that is roughly half of what the commercial version will cost. But anyone eager to own the limited edition must go through Kickstarter before June 19.