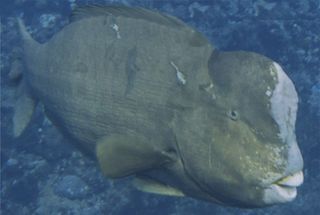 The dominant male, showing scale damage on back and side, is shown here following the head-butting bout. The giant bumphead parrotfish (Bolbometopon muricatum), which can reach 4 feet (1.3 meters) long and 100 pounds (46 kg), is named for its bulbous foreheads (shown here); its eccentric look gets a boost from the pouty lips and yellowish-to-pink face.
(Image: © PLoS ONE)

Scientists diving in the North Pacific were jarred when they heard mysterious sounds like spear guns being fired. The jolting noises turned out to be never-before-seen (or heard) head-butting bouts between some of the largest coral-reef fish, called parrotfish.

As they studied groups of the giant bumphead parrotfish (Bolbometopon muricatum), which can reach 4 feet (1.3 meters) long and 100 pounds (46 kg), the researchers were able to document the violent behavior with video and images.

The reef fish are named for their bulbous foreheads, which add to their eccentric, pouty lips and yellowish-to-pink faces. [See Photos of Head-Butting Fish]

"To us, it sounded like someone was firing a spear gun off close to our ears. Before we saw the behavior, we actually joked that the bumpbheads were head-butting like bighorn sheep," study researcher Roldan Muñoz, of the National Marine Fisheries Service, Beaufort Laboratory, in North Carolina, told LiveScience. "We were blown away when we actually witnessed the behavior."

During the summer of 2011, during about 100 hours of snorkel and scuba dives, the researchers witnessed several instances of the head-butting rituals off Wake Atoll. The male parrotfish swam head-on toward each other until they delivered their blow, head-bump to head-bump, a collision that is painful even to watch. Immediately after the head-on crash, the opposing parrotfish swam rapidly in a semicircle, trying to bite the back and flank of each other. [Video of bizarre head-butting parrotfish]

"Following circling, fish swam apart in opposite directions and then turned again face to face to initiate additional collisions," the researchers write this week in the open-access journal PLoS ONE.

Observations of the rowdy rituals revealed that most occurred on the days and in the locations of spawning.

As such, the researchers suspect sexual selection can explain the emergence of the so-called ossified ridge, or bump, atop the male parrotfish's head, along with the butting behavior. Sexual selection would favor the development of the hump and head-butting behavior if this trait and behavior increased a male's chances of successfully competing with other males, and ultimately mating with females.

"We believe that bumphead males head-butt to establish dominance and access to preferred territory that is then used to advertise to females that the males are available for mating," Muñoz said. In fact, in videos of the violent display, the male that wins the butting bout hovers over a particular spot, maintaining his place in the water column to await the females.

"No one has ever heard of any species of marine fish head-butting until now," Muñoz said.

But how could such boisterous behavior go unnoticed for so long?

Researchers have some thoughts on that. Since the behavior is the result of competition between males for access to the gals, it is likely to occur only in high-density populations of the fish. Many of the populations have dwindled and so would be unlikely to support the behavior.

The perfect spot for head-butting? The Great Barrier Reef, which holds the healthiest bumphead populations along its outer reefs.

"But one would have to be at the outer reef early in the morning, specifically trying to observe reproductive behavior, in order to have a chance of observing head-butting — and this is no small feat given the distance from shore of the outer reefs," Muñozsaid.

"At Wake Atoll, the outer reef is very close to shore, so we were easily able to put ourselves in the right place at the right time. But we were absolutely surprised."

The researchers plan to return to Wake Atoll to learn more about the bumphead population's mating behaviors.

Editor's Note: This article was updated to clarify a statement about sexual selection.