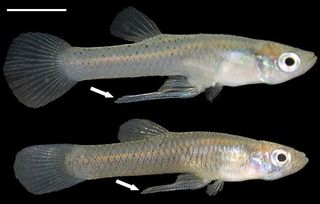 Female mosquito fish prefer males with a solid nutritional upbringing, a quality the females may pick up on based on the size of a potential mate’s sexual organ.

For some animals, looks and wealth aren't everything. Female mosquitofish prefer mates that had a steady nutritional upbringing over those that suffered a poor start in life with a restricted diet, even though the male fish are physically similar in adulthood, a new study shows.

Male mosquitofish — an invasive species in Australia originally introduced to control mosquitoes — born in a food-scarce environment will delay sexual maturation and undergo a period of accelerated growth when food becomes available. The fish use this strategy, called compensatory growth, to ensure that they mature to the same size as males that developed normally. Researchers found that females choose to associate with larger males, regardless of developmental history, as is the case with many other animal species. But when given the choice between two equal-size males, the females gravitate toward the males that had experienced normal growth.

The researchers are unsure how the females are able to tell the difference between the seemingly identical males, but they suggest that differences in locomotion or the relative length of genital organs (called gonopodia) may be involved.

Whatever the case, "this work demonstrates there are hidden costs to a poor start in life," study lead author Andrew Kahn, a biology graduate student at the Australian National University, said in a statement.

Kahn and his colleagues reared 365 newborn male mosquitofish, all of which were fed the same amount of food for their first week of life. They then put around half of the fish on a severely restricted diet for three weeks, before returning them to a normal diet until they matured.

In an aquarium with three compartments, the researchers tested 47 pairs of full-sibling brothers that were nearly identical in size but had different developmental histories. They placed one male at each end of the aquarium and a virgin female in a transparent cylinder in a central compartment.

When the researchers removed the cylinder, the now-free females were more attracted to the normal-growth males — they spent more time staring at those males.

The effects of poor nutrition

As for how the females could pinpoint a male fish's nutritional background, various physical or other cues may be at play. Perhaps the female fish caught a glimpse of the male's genitals. Research has shown that early food limitation decreases the length of a male's gonopodia relative to his body size and other studies suggest that females prefer males with longer gonopodia.

On the other hand, the females may have been able to detect subtle differences in how the males moved, a factor also affected by developmental history in some fish species.

At the end of the day, the researchers believe the females are looking to mate with the normal males because they are likely healthier.

"If males have undergone a period of poor nutrition they might be more susceptible to diseases, which they could then pass on to the female," Kahn said. "And there are the indirect genetic reasons — by choosing males who have had a better development history, your offspring have a good chance of being better at getting food when they are young."

The research was published Jan. 11 in the journal Biology Letters.