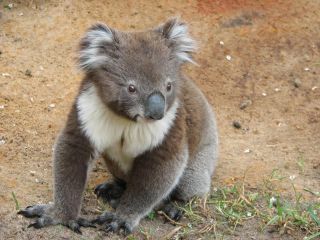 Koala bears, which are not bears at all and instead marsupials, spend most of their time in trees, though do take some time on the ground. New research suggests when mating season comes around the males can boast their size with their bellowing calls.
(Image: © Susan Flashman | Shutterstock)

During mating season, the usually quiet koala community comes alive with deep, choppy growls made by males advertising their goods.

Now researchers have found that male koalas advertize their size by changing the resonance of their calls. Lower resonances (also called formants) have a more baritone quality, and advertize larger males, an attractive quality in a koala. .

The bellows start with an "introductory phase" that sounds kind of like someone hyperventilating. It's followed by a deep, choppy click-like noise. In humans, formants are essential to speech, as they help us distinguish between vowels. They have also been shown to be related to body size in several mammals. [Dissecting Decibels: The Loudest Animals (Infographic)]

The researchers studied a group of 20 male koalas during the 2010 koala breeding season at Lone Pine Koala Sanctuary in Australia. They recorded and analyzed the animals' bellows and measured their head length, which they used as an indicator of body size. They also used magnetic resonance imaging to create detailed images of the vocal tracts of a pair of dead koalas.

They found that the koalas with the largest heads had bellows with the most closely spaced, lowest formants. Upon studying the anatomy of the koala's larynx, the researchers noted that it is specifically designed to give this identifying mating call.

The koalas have a descended larynx, which means it's situated lower down in the throat, giving more room for the vocal tract above it to extend farther. The larger males have even more room for a lengthy vocal tract, resulting in more baritone bellows. They might also use the cavities in their nose and mouth to make the sound more resonant.

Charlton's previous research has shown that male koala bellows are unique to the individual and so can be used to distinguish between individual koalas; and their indication of size could intimidate other males, suggesting various purposes for the bellows. These changes in formant spacing would even be perceptible to us.

The koalas make other sounds as well, and even females bellow, but the researchers haven't picked apart what these other noises mean. While they assume that the females would pick males with lower, more closely spaced formants, the researchers didn't analyze females in this study, so they can't say what their specific behavioral responses to the different calls would be.

The females do prefer larger males because they are more likely to produce larger, more competitive offspring, which have better chances of surviving and having their own offspring. These larger males would have distinctive bellows.

The calls themselves are actually very exaggerated. Based on their resonances, the koala's larynxes should be 20 inches (50 centimeters) long, longer than the koalas are tall. Their resonances are comparable to the calls of a bison. Because the bellows boast a male's quality as a stud, competition could have driven them to develop such an exaggerated trait.

The study was published today (Sept 29) in The Journal of Experimental Biology.