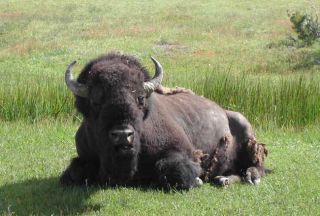 Bison with the loudest bellows lose out in the mating game, while the quietest bulls score the most mates and sire the most offspring.

"We were expecting to find that the bigger, stronger guys — the high-quality males — would have the loudest bellows, because they can handle the costs of it," said Megan Wyman, a graduate student in geography at University of California, Davis and the lead author of the study. "But instead, we found the opposite.

Wyman and colleagues also found that the volume of a bison bull's bellow was not related to its weight or age.

American bison are not buffalo. But these icons of America are prone to homosexual behavior. More than 55 percent of mounting in young males is with the same gender. Meanwhile, they eventually do get the job of procreation done during the annual rut.

Wyman and Michael S. Mooring of Point Loma Nazarene University and a number of student interns spent two summers monitoring the mountings and other activity of 325 wild bison in Fort Niobrara National Wildlife Refuge in the Sandhills region of north-central Nebraska.

The reason a soft touch works is not clear, but it could be the bulls want to keep it down so other males don't horn in on their activity.

Bison bellows are loud, low-frequency vocalizations performed by bulls during the rut. They are most commonly used when one male challenges another, typically when the two are within 45 to 90 feet of one another. Yet sometimes a bellow will attract bulls from further away, and this may be one reason that a herd's dominant bulls keep their voices down, Wyman speculates.

"It could be that bulls provide information about their high quality through other signals — for example, the frequency or the duration of their bellows. So they don't have to be louder, they just have to be heard," she said. "If you bellow too loudly, it could bring in too many other bison to check you out."

Wyman wonders why lower-quality males don't turn down the volume of their bellows to emulate their more successful rivals.

"That's a lot harder to explain," she said. "It could be that if you use a quieter volume, other bulls have to approach even closer to check you out, and any time you bring someone that close, there's a higher risk of attack. And that's the type of cost that these low-ranking bulls may not be able to bear."

Bison once numbered in the tens of millions across the continent, but they were wiped out by commercial hunting and habitat loss. By 1889, fewer than 1,100 individuals remained. Some 500,000 exist today, but only about 20,000 are wild; one conservation group says they could be poised for a big comeback.

Observing the herd for 14 hours each day during the two-month rut of July and August, the researchers recorded each copulation and to detail the tangled web of connections between males and females as bulls lost and gained cows during their intense competitions. To assess where each bull ranked in the herd's hierarchy of dominance, Wyman tallied outcomes of challenges between rivals, including threats that ended with an animal backing down in the face of combat, as well as full-blown, head-to-head fights.

When calves were born the following spring, DNA samples were taken to determine parentage.

For measurements of amplitude, Wyman used a hand-held sound-level meter from the safety of her vehicle. With each reading, she also recorded specific behaviors of the bull, his female and any challenging rivals, as well as noting the factors that could affect the level of the reading such as the bull's head orientation, its distance from the meter and wind conditions.

Her analysis showed that, on average, the least successful bulls — those with the lowest number of copulations and offspring — bellowed at least 50 percent louder than their more successful rivals, corresponding to decibel readings averaging from 109 per bull down to 103. This drop in volume correlated with a rise in the number of times a bull copulated from none to five, and the number of calves it sired from none to nine.

The findings were detailed in the November issue of the journal Animal Behaviour.