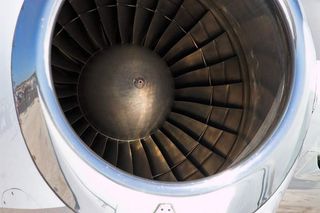 Researchers have discovered an unlikely link between patterns of airflow in a jet engine and how the human larynx produces sound.

The basics of voice production are well known: The nerve cells fire triggering the muscles to bring the vocal cords together. The interaction between air and vocal cords causes the cords to vibrate, generating sound.

If this were the only mechanism involved in producing sound, every person’s voice would sound mechanical, but the specifics of how airflow affects sound production and quality is the reason each voice is different, said Sid Khosla, lead author of a study detailed in the March issue of the journal Annals of Otology, Rhinology and Laryngology.

Vortices—areas of rotational motion that look like smoke rings— eventually break down into turbulent motion that can produce sounds in jet engines.

“We were wondering if vortices produce additional sound in the larynx,” Khosla told LiveScience. Turns out that in the larynx vortices form sound by interacting with the structures above the vocal cords.

These vortices, Khosla said, have been presented in mechanical models and mathematical models, but no one up to now has been able to describe them or look at them in an animal model. Khosla and colleagues have done so, studying dogs.

“The canine larynx is the closest to the human larynges that we know,” Khosla said.

Understanding how sound develops in this new model could benefit people with vocal problems.