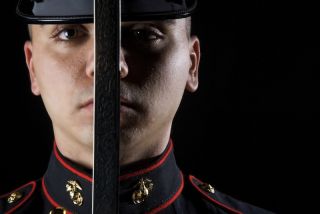 U.S. soldiers are not out of harm's way as the wars in Afghanistan and Iraq wind down. Newly released numbers show 154 suicides by active-duty military members in the first 155 days of 2012.

The nearly one-a-day suicide rate revealed by the Pentagon today (June 8) represents a troubling increase over previous years. The Associated Press, which obtained the numbers, said military officials and psychologists aren't certain what caused the surge, but part of the problem may be the culture of the military itself, which values traditional masculine stoicism and toughness under stress.

Of course, mental toughness, stoicism and self-sufficiency are important tools during battle, said Eric Caine, co-director of the Center for the Study and Prevention of Suicide at the University of Rochester Medical Center. But outside of war zones, these same characteristics can make it difficult for a service member to accept psychological help.

Suicide in the armed forces

The Pentagon statistics showed 154 military suicide deaths from Jan. 1 to June 3 this year, compared with 130 over the same period last year. The numbers put this year's suicide rate 16 percent ahead of 2009, the worst year on record for the number of self-inflicted deaths in the armed forces.

The numbers, which include only active-duty troops, exceed the number of combat-related deaths in Afghanistan by about 50 percent, according to the Associated Press.

Though the stress of conflict in Iraq and Afghanistan may be part of the cause for the suicides, Caine also observed that the military may be a different beast than it was a decade ago. [Infographic: PTSD Among Veterans]

As the wars in Afghanistan and Iraq ramped up, military recruiting standards were relaxed. In 2004,for example, 12 percent of recruits required special waivers to allow them to sign up for service despite misdemeanors, drug- and alcohol violations or medical issues. By 2006, that number ticked up to 15.5 percent. A history of alcohol or drug abuse is a risk factor for suicide.

"We know the composition of the Army has changed over time," Caine said. "We don't know how that might have influenced who is vulnerable."

Getting used to death

Psychologists think of suicide as a reflection of both a person's life stressors, including relationship and financial problems, and their own vulnerabilities and protective factors. Military life can take a toll on some of the protections against self-harm. For example, repeated transfers and deployments can disrupt a person's social support system. Some people are adept at rebuilding their social networks, Caine said, while others struggle.

Soldiers are also exposed to the possibility of death, both in combat and in training sessions that encourage them to tamp down fear of pain and dying. Florida State University psychologist Thomas Joiner, who developed a theory of why people commit suicide, suspects that the military can give service members an "acquired capability" for suicide. Essentially, their exposure to death numbs them, making them more likely than a civilian to go through with a suicide attempt.

Military members also have abundant access to the tools of suicide.

"If one is trained to use guns in combat, the use of a gun in suicide may not invoke as much fear as other potential methods," Joiner and his colleagues wrote in April 2010 in the journal Clinical Psychology Review.

That's not to say military suicide is inevitable. Suicide rates change in response to real-world stress, and suicide prevention programs can help. The Air Force, for example, instituted a suicide prevention program in the 1990s after seeing an increase in the number of suicides. The program sought to identify suicidal service members as well as ferret out problems that can lead to suicidal thoughts in the first place. A 2003 study on the program published in the British Medical Journal found that in the years after the program launched, the risk of suicide among active-duty personnel dropped 33 percent.

The key to making these programs work is to convince recruits that it's okay to reach out for help, or accept it when it's given, Caine said. It's also important to catch people before they reach their breaking point.

"When in the midst of a crisis, there is always the focus on 'How do I detect and deal with the people who are already suicidal?'" Caine said. "On the other hand, it's really important to ask, 'How do I change the environment so fewer people become suicidal?'"