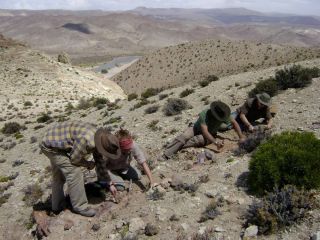 A newfound giant predatory dinosaur with even stubbier arms than Tyrannosaurus rex may now hint that a vast desert once existed in the heart of a lost supercontinent, potentially barring this carnivore and its kin from spreading across the entire ancient world, researchers say.

The newfound abelisaurid species, discovered in Patagonia in Argentina, is named Eoabelisaurus mefi, or "dawn Abelisaurus of the Museo Palentológico Egidio Feruglio." Based on the nearly complete skeleton, the carnivore was about 21 feet (6.5 meters) long and lived about 170 million to 175 million years ago, back when the area was hot and ranged between pronounced dry seasons and extensive rain.

The finding, detailed online May 23 in the journal Proceedings of the Royal Society B, suggests the abelisaurids, whose origins have remained enigmatic, originated at least 40 million years than before thought. This meant that abelisaurids existed back when all the continents were united in the supercontinent Pangaea. [See Photos of the New Dinosaur]

Abelisaurids generally resembled tyrannosaurids in appearance, stalking the land on two legs, although their skulls were relatively shorter in length and taller in height, with a shape that hinted they had extremely powerful bites. As squat as the arms of tyrannosaurids were, abelisaurids had even squatter limbs that appeared even less useful — for instance, they typically lacked wrist bones.

"Why these animals had such tiny arms is a good question," said researcher Oliver Rauhut, a paleontologist at the Bavarian State Collection for Paleontology and Geology in Germany. "One part of the answer might be that both had skulls that were adapted for very powerful bites, so these animals obviously relied on 'head hunting' for acquiring prey and didn't need the arms for that."

Rauhut added that tyrannosaurids and abelisaurids had specialized arms, with abelisaurids having an enlarged shoulder girdle, indicating muscle strength, as well as more flexibility of the upper arm. "What they did with these arms is anybody's guess," Rauhut said.

The fossil was first discovered in 2009 during a large-scale prospecting campaign by researcher Diego Pol at the Egidio Feruglio Paleontological Museum in Argentina in a dry, savannahlike landscape. "Basically everything that grows there has thorns," Rauhut said. Native animals include the lowland llama, a small flightless bird known as the nandu, and armadillos, "but what you see most is actually sheep," Rauhut added.

The arms of Eoabelisaurus are not as tiny as those of later abelisaurids, but they are still unusually small, revealingthat shortening of abelisaurid arms began very early in their evolution. This reduction apparently started with the lower arm — in Eoabelisaurus, the upper forelimb is of normal size, but the lower arm is much shorter in comparison, with a very stunted hand and tiny fingers and claws.

The fact that Eoabelisaurus lived about 175 million years ago suggests abelisaurids could have spread across the whole of Pangaea before it fragmented about 10 million to 15 million years later into Gondwana and Laurasia, the supercontinent once made up of what is now Europe, Asia and North America. Since abelisaurids were apparently exceedingly rare in the Northern Hemisphere, a natural barrier may have prevented their advance northward, researchers suggested.

Growing evidence from climate models and geological data suggests a huge desert in the center of Gondwana might have kept abelisaurids from dispersing to the north. Such a barrier could also explain why other groups of animals were restricted to Gondwana, such as certain mammals and giant plant-eating sauropods, the researchers explained.

The scientists hope to continue investigating the dinosaurs of Patagonia. "Dinosaurs from the Southern Hemisphere are still extremely poorly known, so we can expect to find more surprises," Rauhut told LiveScience.