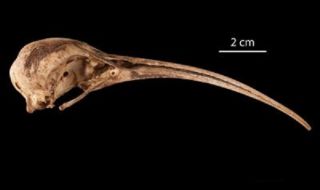 This is the skull of Apteribis sp.
(Image: © Carla Dove)

About 1,000 years ago, a little lost Ibis got stuck in a cave on the Hawaiian island of Lanai. When researchers discovered his skeleton in 1995, his feathers served as the first example of the how these extinct Hawaiian ibises were adorned.

The nearly complete skeleton of the small bird was discovered in a lava tube (a type of cave created by lava flow). Because of the extra-dry environment in the cave, the fossilized feathers were preserved well enough to make out microscopic structures.

The wing bones and chest bones revealed the bird was flightless like modern ibises. However, these bones looked so different from those of other ibises that researchers needed feathers and DNA analyses to confirm the species' place on the ibis family tree.

"We knew it was an ibis. It was a flightless ibis. The skeleton that was found with the feathers differed so much from the mainland ibis, that its relationship to the other ibises was undeterminable," study researcher Carla Dove, of the Smithsonian's National Museum of Natural History, told LiveScience.

The researchers compared the fossilized feathers with feathers from 11 modern ibises. They focused on the feathers' barbules, microscopic structures within the downy part of a feather near the base. These barbules are distinctive of certain species of ibis.

Their analyses suggested the bird was a member of the genus Apteribis, a group of flightless ibises from the Hawaiian Islands discovered in 1976 and whose members are related to the American white ibis and the scarlet ibis. It is one of dozens of bird species known to have gone extinct after humans arrived on the Islands.

Though the birds appeared to have been flightless, the researchers discovered they were equipped with small structures called hooklets, which hold a feather's wispy strands together, giving them structure in the face of wind or water stresses. These hooklets are special adaptations for flight.

Because the feathers were so well preserved, the researchers were even able to see some of the feather colors. One set of feathers were dark in color, possibly dark brown or black, while another set was lighter,  perhaps beige or ivory. The researchers suggest the extinct species may have looked like a young American white ibis.

"The pigmentation in the fossil feathers showed that the plumage was probably most similar to that of juvenile white ibises, which are brown with a whitish belly, rather than adults, which are all white," study researcher Storrs Olson, also at the National Museum of Natural History, told LiveScience in an email.

"The Hawaiian birds (also known from Molokai and Maui but not the other islands of Hawaii) were shorter legged and had small wings compared with white ibises and were probably almost entirely forest dwellers that fed on snails and other invertebrates in the forest litter."

The study was published in the September 2011 issue of the Journal of Paleontology.