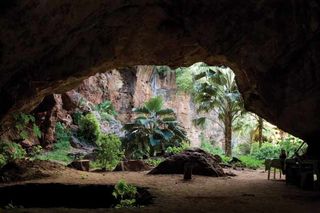 The Makauwahi Cave in Hawaii may be the richest fossil site in the entire Pacific Island region, loaded with bird and fish bones and ancient Polynesian artifacts.
(Image: © Alec Burney)

From the moment we saw it, we knew the place held many great secrets. We had been looking for new fossil sites on the south side of the Hawaiian island of Kauai in 1992 with our colleagues, Helen F. James and Storrs L. Olson of the Smithsonian Institution in Washington, D.C., along with their children, Travis and Sydney, and our own, Mara and Alec.

And what we found was a cave — once a Pleistocene dune field, and later a sinkhole with pickling-jar powers — that may be the richest fossil site in the Hawaiian Islands, perhaps in the entire Pacific Island region.

Sixteen years after our discovery, we have excavated seeds, pollen, Polynesian artifacts, thousands of bird and fish bones, and more from this half-acre pile of sediments spanning many millennia. The site has yielded up some of the island's long-kept secrets, telling of a time when the largest land animals here were flightless waterfowl, such as the turtle-jawed moa nalo (Chelychelynechen quassus). Moreover, it documents the great changes that occurred when first Polynesians, and later Europeans, Americans, and Asians, arrived with boatloads of invasive alien species.

The first boats began arriving roughly a thousand years ago, kicking off the first of three stages of extinction on Kauai. In the first stage, Polynesians probably overhunted the large flightless birds, while introduced rats, chickens, and small pigs disrupted their remaining nests. Later, but before Captain Cook arrived in 1778, the agriculture of a growing Hawaiian population wiped out more species. Finally, Europeans arrived and brought goats and other livestock that finished the job.

In 2000 we learned the long-lost nineteenth-century name of the cave, Makauwahi, thanks to a local archaeologist, William K. "Pila" Kikuchi, who recovered the name from an essay written by a high school student more than a century ago. It means something like "smoke eye." That may have been in reference to Keahikuni, a mid-nineteenth-century native diviner who read the future in spirals of smoke rising from the sinkhole.

The story struck a resonant chord, as we had begun thinking about Makauwahi Cave as a preserver of the future at least as much as the past. In 2004, we were granted a lease on the cave property, including the surrounding seventeen acres of dunes, wetlands, and abandoned farmland, by the owners, Grove Farm Company. Using the fossils as a guide, we set out to suppress plants introduced in the last two centuries and to favor those that evolved here or were brought from other Pacific islands by the first human inhabitants.

The most unusual patch of land is on several acres of weedy thicket formerly used for cane and corn farming. After only three years of rehabilitation, nearly a hundred species of native and Polynesian trees, shrubs, and ground covers are now thriving. Planted by volunteers, including some of the same folks who helped us sift the fossils from the cave sediments, and the eager assistance of hundreds of schoolchildren from all over Kauai, the new forest has flourished beyond all expectations.

Thousands of acres of abandoned farmland throughout the Hawaiian Islands could grow native plants just as well as this!

Unfortunately, many of the animals that disappeared from Kauai were unique to the island. But even if we can't have giant, flightless waterfowl, we can make the area more attractive to the surviving species of birds, animals, and insects that are indigenous to the island. In this way and others, we'd like to think we can be a little like old Keahikuni the Diviner in telling the future. Here at Makauwahi, which has given us such a powerful sense of the past, we can find a better future for an island world that was nearly lost.

David A. Burney and Lida Pigott Burney live on Kauai. David is Director of Conservation at the National Tropical Botanical Garden, and Lida manages the Makauwahi Cave Reserve.