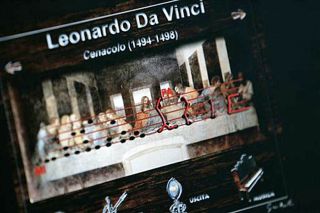 A laptop screen shows musical notes possibly encoded in Leonardo Da Vinci's "Last Supper." A 45-year-old Italian musician who lives near the southern Italian city of Lecce studied Leonardo's painting in 2003, after hearing on a news program that researchers believed the artist and inventor had hidden a musical composition in the work.
(Image: © Gregorio Borgia/AP)

ROME (AP) — It's a new Da Vinci code, but this time it could be for real. An Italian musician and computer technician claims to have uncovered musical notes encoded in Leonardo Da Vinci's "Last Supper," raising the possibility that the Renaissance genius might have left behind a somber composition to accompany the scene depicted in the 15th-century wall painting.

"It sounds like a requiem," Giovanni Maria Pala said. "It's like a soundtrack that emphasizes the passion of Jesus."

Painted from 1494 to 1498 in Milan's Church of Santa Maria delle Grazie, the "Last Supper" vividly depicts a key moment in the Gospel narrative: Jesus' last meal with the 12 Apostles before his arrest and crucifixion, and the shock of Christ's followers as they learn that one of them is about to betray him.

Pala, a 45-year-old musician who lives near the southern Italian city of Lecce, began studying Leonardo's painting in 2003, after hearing on a news program that researchers believed the artist and inventor had hidden a musical composition in the work.

"Afterward, I didn't hear anything more about it," he said in an interview with The Associated Press. "As a musician, I wanted to dig deeper."

In a book released Friday in Italy, Pala explains how he took elements of the painting that have symbolic value in Christian theology and interpreted them as musical clues.

Pala first saw that by drawing the five lines of a musical staff across the painting, the loaves of bread on the table as well as the hands of Jesus and the Apostles could each represent a musical note.

This fit the relation in Christian symbolism between the bread, representing the body of Christ, and the hands, which are used to bless the food, he said. But the notes made no sense musically until Pala realized that the score had to be read from right to left, following Leonardo's particular writing style.

In his book — "La Musica Celata" ("The Hidden Music") — Pala also describes how he found what he says are other clues in the painting that reveal the slow rhythm of the composition and the duration of each note.

The result is a 40-second "hymn to God" that Pala said sounds best on a pipe organ, the instrument most commonly used in Leonardo's time for spiritual music. A short segment taken from a CD of the piece contained a Bach-like passage played on the organ. The tempo was almost painfully slow but musical.

Alessandro Vezzosi, a Leonardo expert and the director of a museum dedicated to the artist in his hometown of Vinci, said he had not seen Pala's research but that the musician's hypothesis "is plausible."

Vezzosi said previous research has indicated the hands of the Apostles in the painting can be substituted with the notes of a Gregorian chant, though so far no one had tried to work in the bread loaves.

"There's always a risk of seeing something that is not there, but it's certain that the spaces (in the painting) are divided harmonically," he told the AP. "Where you have harmonic proportions, you can find music."

Vezzosi also noted that though Leonardo was more noted for his paintings, sculptures and visionary inventions, he was also a musician. Da Vinci played the lyre and designed various instruments. His writings include some musical riddles, which must be read from right to left.

Reinterpretations of the "Last Supper" have popped up ever since "The Da Vinci Code" fascinated readers and movie-goers with suggestions that one of the apostles sitting on Jesus' right is Mary Magdalene, that the two had a child and that their bloodline continues.

Pala stressed that his discovery does not reveal any supposed dark secrets of the Catholic Church or of Leonardo, but instead shows the artist in a light far removed from the conspiratorial descriptions found in fiction.

"A new figure emerges — he wasn't a heretic like some believe," Pala said. "What emerges is a man who believes, a man who really believes in God."