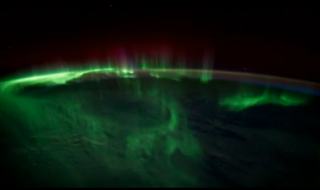 A still from a new video shot by astronauts aboard the International Space Station. This shot shows the southern lights over the Indian Ocean.
(Image: © NASA)

A stunning new video shows Earth through an astronaut's eyes, letting the rest of us see just how beautiful our planet is from 240 miles up.

The four-minute video combines several sequences of time-lapse imagery snapped recently by astronauts aboard the International Space Station. It takes viewers around the world, above dramatic lightning storms and through dazzling displays of the northern lights, also known as the aurora borealis.

One such light show over the United States and Canada features prominently near the beginning of the video. The boundary between Earth and space appears to be aflame as the flickering green lights dance and roll over great swaths of the Northern Hemisphere.

"We're walking in the air; we're floating in the moonlit sky," the video's background song, "Walking in the Air" by Howard Blake, proclaims. Then, as the scene shifts to nighttime views of Central Europe and the Middle East: "The people far below are sleeping as we fly."

Other spectacular sequences include the southern lights — or aurora australis — churning over the Indian Ocean, and a glorious moonset that shows Earth's nearest neighbor moving from the blackness of space through the bluish haze of our atmosphere.

The death-defying Comet Lovejoy also makes an appearance. Lovejoy was thought to be a goner after a close pass by the sun this December, but the icy wanderer emerged from behind our star and zipped off into space, tailless but unbowed.

The images were snapped by NASA astronauts Dan Burbank and Don Pettit, as well as European spaceflyer Andre Kuipers. Burbank was commander of the space station's Expedition 30, which ended April 27 when Burbank and Russian cosmonauts Anton Shkaplerov and Anatoly Ivanishin returned to Earth.

Pettit and Kuipers remain aboard the orbiting lab, along with the commander of its new Expedition 31, cosmonaut Oleg Kononenko. The three spaceflyers will have the huge complex to themselves until May 17, when the rest of Expedition 31 — NASA astronaut Joe Acaba and cosmonauts Gennady Padalka and Sergei Revin — are slated to arrive.