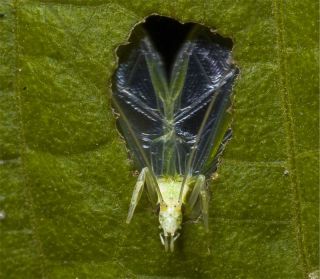 Among many male crickets, larger body size means a lower pitched song and more attention from the lady crickets. But male tree crickets break this rule: The pitch of their song changes with temperature.

The basic mechanics are straightforward, according to new research that explores tree crickets' unusual song. Tree crickets have more elongated wings than other species, particularly field crickets, and tree crickets vibrate their entire wing when they call, rather than just part of it, as other crickets do.

But the discovery points to another, trickier question: Why?

The variability in male tree crickets' call creates a problem. Normally, female crickets find their mates by tuning into the precise frequency at which the males broadcast their chirpy song, tuning out other noise. But if males' calls aren't finely tuned, how do females home in on them? [Cricket Sets Testicle Size Record]

This unusual feature of tree crickets' song was first reported in 1962. To get a handle on how and why tree crickets' pitch varies due to temperature, a British and Indian team closely examined the movements of the insects' wings, using computer modeling to better understand them.

"If you look at a tree-cricket wing, they are longer than they are wide. What that does is it makes them ring not a one single note, but at a range of notes closer to each other in pitch," said lead researcher Natasha Mahtre, a postdoctoral researcher at the University of Bristol in the United Kingdom.

The body temperature of crickets, as with all insects, depends on the temperature of their environment. In warmer weather they are more active, and bring their wings together more quickly. As a result, the frequency of the vibration increases and the pitch — the perceptual quality associated with frequency — becomes higher. The opposite happens in cooler weather.

Among field crickets, the frequency of the vibration is so finely tuned that the change in wing speed does not change it.

But the biggest mystery remains.

"There is no biological reason we can think of for them to want this geometry, or to want this frequency variation," Mahtre said of tree crickets.

It's possible that females can use the variation to pick up on clues to the attractiveness of the male cricket — such as how much he's recently eaten or whether he is located in a desirably warm spot, Mahtre explained to LiveScience. But most likely, the variation originated as an unintended consequence.

"They would want to be loud, and I think this is a byproduct of wanting to be loud," Mahtre said.

Tree crickets achieve more volume by having elongated wings and vibrating the whole wing, rather than part of it. But both of these traits prevent their calls from being finely tuned, their research indicated.

The study, funded by a U.K. India Research and Education Initiative, an EU Marie Curie fellowship grant and a Biotechnology and Biological Sciences Research Council grant, was published today (April 30) in the journal Proceedings of the National Academy of Sciences.