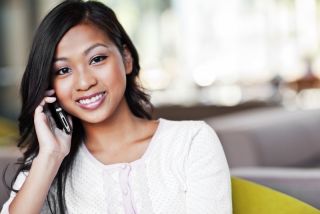 Best friends aren't forever, at least if phone records are any indication. A woman's No. 1 contact during her 20s is most often a male, but by age 45, she'll most likely be calling another woman — probably her daughter — more than anyone else, a new study finds.

Men show a much more consistent pattern, with a tendency to be linked to a female "best friend" their entire lives, researchers report Thursday (April 19) in the journal Nature Scientific Reports. The researchers suspect these patterns reflect women's strategic social ties, which seem to be focused on their mate during the reproductive years and then shift to children later in life.

"What this looks like to us is a strategic investment in social capital on the part of women that men just don't do," said study researcher Robin Dunbar, an anthropologist at the University of Oxford. "You have a limited amount of time, effort and emotion that you can invest in your relationships, and women tend to invest very heavily in single individuals." [Top 10 Warrior Moms in History]

It's not easy to track personal relationships across the entire life span, so Dunbar and his colleagues turned to phone records. Using a database of the mobile phone calls and texts of more than 3 million Europeans over seven months, the researchers looked at patterns by age and gender. They designated the most-contacted person of each mobile subscriber as the "best friend," using phone contact as a stand-in for interaction.

The analysis revealed that starting at age 18 for women and 22 for men, people usually have an opposite-sex "best friend." A man's best friend is most likely to be a woman across his entire life span, but women show a different pattern. They keep up the male-best-friend pattern for about 14 years (until an average age of 32), after which their calling pattern turns more female-friendly.

"The male, who is presumably initially the boyfriend and later the husband, is flipped out into second place, replaced with what we take to be a daughter," Dunbar told LiveScience. (The researchers didn't have information on family relationships, but they did know that the age of this new "best friend" is about a generation younger.)

Keeping up with kin

The differences could be evolutionary, Dunbar said. Women might focus on their own reproduction and then, once they have daughters, pour their energies into supporting them and any grandchildren. Women also tend to have stronger relationships than men, whose relationship are often weaker and more "of the moment," Dunbar said.

"You see this reflected in the phenomenon known as 'kin-keepers' as well, the people in families who are often responsible for maintaining the flow of information around the family network," Dunbar said. "It's nearly always women."