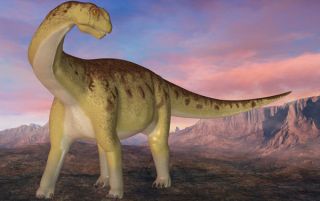 An artist's depiction of a Camarasaurus.
(Image: © Dreamstime)

A young Missouri man has turned to the Internet in search of investors for his expedition into the remote jungles of Africa seeking to document undiscovered flora and fauna. That is not so unusual, but one of the creatures he hopes to find is: a living dinosaur.

The region Stephen McCullah, the organizer of the expedition, has chosen to explore is the reputed home of the Mokèlé-mbèmbé, a dinosaur-like creature said to be up to 35 feet long (11 meters), with brownish-gray skin and a long, flexible neck. Many locals believe that it lives in the caves it digs in riverbanks, and that the beast feeds on elephants, hippos and crocodiles.

McCullah posted his pitch on Kickstarter.com asking for $27,000 in donations so that he and his friends can launch the Newmac Expedition, "one of the first expeditions in this century with the goal of categorizing plant and animal species in the vastly unexplored Republic of the Congo." The preliminary four-man venture is slated to launch June 26.

Though the team members largely lack formal education in biology or zoology, they "anticipate discovering hundreds of new insect, plant and fish species during the course of our research. There is also the legitimate hope of discovering many reptile and mammalian species. We have received reports...in the region of eyewitnesses seeing canine-sized tarantulas, large river dwelling sauropods [dinosaurs], and a species of man-eating fish," McCullah wrote on the website. [Can We Make Jurassic Park Yet?]

Never mind dinosaurs, which have been extinct for millions of years, for a moment. Finding a spider the size of a dog would be remarkable enough, as the largest-known tarantula, the Goliath birdeater, lives in South America and has a leg span of "only" a foot.

When asked if he really expected to discover monster tarantulas and dinosaurs, McCullah told Life's Little Mysteries, “We don't necessarily expect to find concrete evidence of Mokèlé-mbèmbé (or any other creatures claimed to have been seen in the region) on the first expedition, but we believe there's a good chance during that initial three months that we will find hard evidence of its presence in the area if it is there."

Even if McCullah's team finds that evidence, most cryptozoologists (those who search for unknown or hidden animals) believe that only a live or dead specimen would convince mainstream scientists that animals such as Bigfoot or Mokèlé-mbèmbé exist — the blurry photos and videos, footprints and eyewitness reports that make up the vast majority of the evidence for these creatures are simply not enough. McCullah and his team will need specialized equipment to capture these animals — and a living dinosaur would require a pretty big net. [10 Most Active 'Bigfoot Sites' in the US]

"We are in the process of looking at live methods for capture of large animals," McCullah said. "We will be attempting to bring a tranquilizer rifle, but there are many issues and unknowns we will have to overcome to subdue an animal like Mokèlé-mbèmbé with a tranquilizer gun."In his Kickstarter pitch, McCullahnoted that there have been several previous expeditions to the Congolese jungles in search of large unknown animals (including Mokèlé-mbèmbé), and yet they all failed to find good evidence. He believes that his group's youth and enthusiasm will help them succeed where others have failed. The arsenal of cutting-edge technology they plan to bring should help as well: "We will be utilizing satellite images, trail cameras, a Thermal camera to track animals, and sonar to search through the murky waters."

This story was provided by Life's Little Mysteries, a sister site to LiveScience. Benjamin Radford is deputy editor of Skeptical Inquirer science magazine and author of Scientific Paranormal Investigation: How to Solve Unexplained Mysteries. His website is www.BenjaminRadford.com.