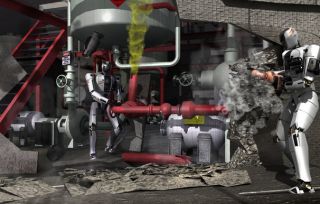 Uncle Sam wants you to make a military robot capable of walking on two legs, handling power tools and even driving vehicles. Luckily, the U.S. military's new robotics challenge aims to save lives rather than hunt down human warriors, Terminator-style, on the battlefields of tomorrow.

The $2 million challenge by the U.S. Defense Advanced Research Projects Agency appeared in an official online solicitation today (April 10). DARPA wants a humanoid robot to replace humans doing dangerous work in the aftermath of terrorist attacks, industrial accidents or natural disasters — or a combination of disaster scenarios such as the meltdown at Japan's Fukushima nuclear facility after the tsunami.

DARPA expects the robot to show how it can move a cinder block or similar obstacle out of a doorway, open the door by using the handle, and climb a ladder using its arms and legs. The robot must also prove as handy as Tim the Tool Man by using power tools to break through a concrete panel or wall, find and seal off a leaking pipe, and manually replace a cooling pump.

The robot even has to prove capable of steering, accelerating and braking from the driver's seat of a vehicle — a job much more complex than just putting a robotic "brain" inside a driverless car. Such robots can take orders from human operators, but DARPA will award more points for robots that can handle all these tricky tasks by themselves.

The U.S. military already has thousands of drones soaring above today's battlefields, as well as wheeled robots to scout buildings or disable improvised explosive devices. But legged robots represent the next stage in robot evolution — the U.S. Navy already has plans to build its own robotic firefighter capable of doing humanoid tasks such as climbing ladders and throwing extinguisher grenades.

Competitors with deep pockets can also go on their own without military funding and still try to win the final $2 million prize. But given the steep challenges ahead, they'll need all the money and confidence they can get.