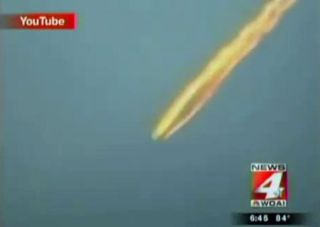 A great ball of fire streaked across the Texas sky during the daytime last week, much to the surprise of thousands of people who witnessed it. So bright that it looked "like a little piece of the sun falling," as one San Antonio resident told the local news station, the rare daytime meteor event was yet another example of the scientific mystery known as spring fireball season.

According to NASA, 30 years of observations show that there's a consistent uptick in the number of fireballs — meteors that glow brighter than the planets as they scorch through Earth's atmosphere — during the spring compared with other times of the year. "There are two peaks: one around February and the other at the end of March and early April," said Bill Cooke, head of NASA's Meteoroid Environment Office. "And this remains a mystery."

The Texas event  was bright enough to have corresponded to the atmospheric burnup of a space rock at least a yard across, Cooke told Life's Little Mysteries. But no one knows why springtime meteors are 10 to 30 percent more common. "I can tell you a lot of the bright and slow fireballs appear to be coming from the direction opposite the sun, but they have not much in common other than that," he said. "You see a lot more ordinary meteors in the fall, but the spring seems to have the big slow movers — the ones that are really impressive."

To tackle the mystery, Cooke and his NASA colleagues have set up a network of "smart meteor cameras" around the United States that they use to triangulate the trajectories of meteors, pinning down their positions to within the area of a football field as they enter the atmosphere. This has enabled the scientists to map the origins of falling space rocks from different parts of the sky.

The approximately 1,800 meteor events recorded by the camera network so far indicate that the spring fireballs probably originate fromasteroids, while fall meteors come from comets. "The [spring fireballs'] orbits indicate they come from the main asteroid belt. A lot of the smaller meteors in the fall come from comets, which are made of icy bits of dust, and they don't last long in the atmosphere. Those ones are generally not big enough to make fireballs."

Once sufficient data has been collected, the scientists expect a pattern to emerge that will reveal the reason for spring fireball season, or the fact that Earth seems to encounter more asteroidal material in the spring. "It appears that a lot of the stuff out there in the asteroid belt is clumping up in the springtime more than other times of the year," he said. [The Greatest Mysteries of the Asteroid Belt]

The other hope is that the network's precision will improve to the point that a fireball's trajectory can be calculated accurately enough to locate and retrieve a meteorite on the ground after it has fallen. That would allow scientists to study what the chunk of asteroidal material is made of, and to trace it back to the asteroid from which it came.